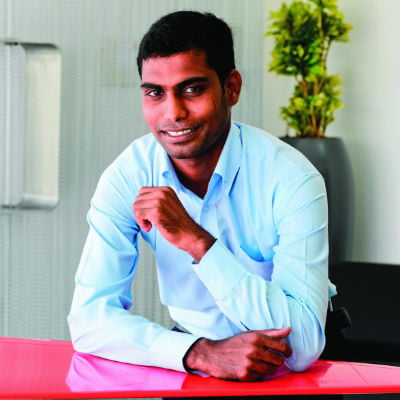 Being sustainable in the workplace does not have to involve excessive planning or heavy expenditure. Even small steps to improve operational practices can go a long way in saving costs and making your office more environmentally friendly. One person who has set an excellent example of this is Srinivas Shanigram, an office assistant at Summertown Interiors.

An Indian national, Srinivas was initially appointed by Summertown Joinery in September 2005 to assist the factory manager with the upkeep of the facility. While there, Srinivas always looked for ways to carry out operations in an environmentally friendly way and significantly minimised factory waste such as wood and packaging materials. Owing to his excellent organisational skills and passion for continuous improvement, Srinivas was recommended for a position at sister company Summertown Interiors.

At Summertown Interiors, Srinivas is responsible for managing paperwork, assisting with office administration, and ensuring the smooth running of shared office facilities such as meeting rooms and the pantry. He recently won a ‘Summie’ Award, an internal recognition scheme to reward employees for their sustainable initiatives.

Last year, Srinivas proactively introduced and improved a number of processes within the company to make Summertown more sustainable and reduce its overhead costs. One of his initiatives included switching to refilled printer cartridges instead of purchasing new ones. Srinivas’s analysis revealed that doing so would save the company at least Dhs12,000 every year.

Impressed with his foresight, management gave Srinivas the go-ahead to source a suitable supplier to provide refilled cartridges.

Responsible for sourcing all office and cleaning materials, Srinivas also took it upon himself to work with the procurement team to research the ingredients of all products to rule out, as much as possible, the use of toxic or non-degradable products when cleaning the office premises. As part of his role to manage the company’s stationery supplies, Srinivas has also switched to ordering 100 per cent eco-friendly paper certified by the Forest Stewardship Council (FSC).

But that’s not all. Srinivas has also found exceptionally creative ways to reuse office paper wherever possible. He is often found cutting up old A1 paper drawings to make into flipcharts or transforming single-sided printed paper into notebooks which he generously hands out to all employees.