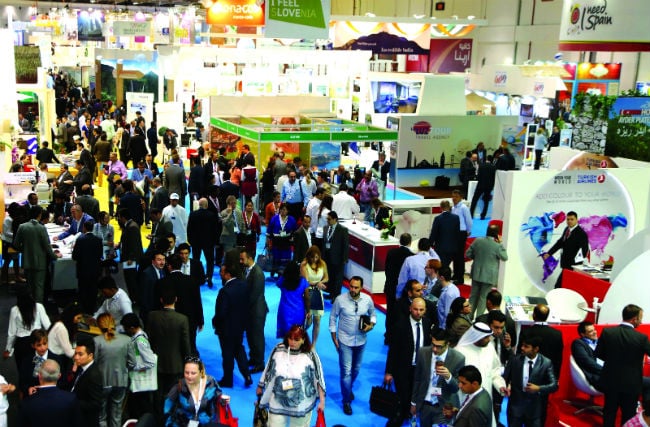 The crowded, eventful Arabian Travel Market (ATM) exhibition in Dubai last month was an accurate reflection of the remarkable boom that the region’s travel trade and tourism sectors are witnessing.

The 21st edition of the four-day event welcomed up to 23,000 visitors, up 10 per cent compared to 2013. It had over 2,700 exhibitors – eight per cent higher than last year – with 120 first-time participants, 68 national pavilions and 40 seminar and tech theatre sessions.

“The halls have been thronged with travel trade professionals and the feedback from exhibitors, speakers and our 115 hosted buyers has been overwhelmingly positive,” says Mark Walsh, portfolio director of Reed Travel Exhibitions.

The event saw a number of hotel launches from top operators including Hyatt and Hilton; new routes from airlines such as flynas; and several insights and reports on the region’s travel and tourism sector from industry players.

The region’s inbound tourism market is clearly growing, thanks in part to the ambitious strategies outlined by cities like Dubai, which aims to attract 20 million visitors per year by 2020.

But encouraged by the stellar performance of the Gulf’s economy, outbound travel is also steadily rising.

A report commissioned by travel technology firm Amadeus and written by Oxford Economics predicts a 7.6 per cent growth in outbound travel spend for the Middle East and Africa over the next 10 years, ahead of Europe and the Americas and behind only Asia.

Visitors from the GCC are the UK’s biggest spenders, splurging an average of Dhs2,440 (£442) per head when they travel to the country, found a survey conducted last year by VisitBritain, the country’s national tourism agency.

Gulf travellers are among the most lucrative and high-yield tourists the Philippines receives, concurs Benito Bengzon junior, assistant secretary, Philippine Department of Tourism. “GCC tourists spend heavily – easily twice as much as the ordinary tourist in the Philippines,” he says.

The South-east Asian country, which witnessed a 15 per cent increase in Gulf visitors last year to 75,000 to 80,000, showcased several luxurious properties at its ATM stand this year.

“We are aiming for 20 per cent growth this year. It’s a fighting target and it means that we have to work harder and step up our marketing and promotions,” says Bengzon.

As part of efforts to achieve that growth, the tourism board is looking to grow its presence in events such as ATM, boost marketing campaigns and, most importantly, increase airline connections.

It is also stepping up its online promotion in the region, and officially launched its new Middle East social media platforms (Twitter and Facebook) during the event. The initiative is expected to generate greater outreach for the Philippines as a leisure destination for urban lifestyle and shopping experiences with family attractions and beach and mountain luxury resorts for visitors from the Middle East, the department said.

Another new – and rather large – destination that is targeting the wealthy GCC traveller is the United States of America. Brand USA, the official tourism promotion agency, was a second-time exhibitor at ATM this year, and officials say the focus is on building awareness about the product.

Anna Klapper, the global market development manager at the agency, says it has begun taking the first steps towards educating the region.

“This area has seen such an economic boom in the last year and so we are trying to get our little piece of it and take advantage of it. Spenders from here are looking for the luxury market and we are really trying to showcase the entire US – it’s a big country with diversity – we have shopping, urban, nature, amazing sceneries, all of it.”

The increase in direct flight connections has helped immensely; by the end of 2013, Chicago, Dallas/Fort Worth, Houston, Los Angeles, New York, San Francisco, Seattle and Washington DC were all connected by at least one Gulf-based carrier.

Another move complementing this growth was the establishment of a US Customs and Border Protection facility at the Abu Dhabi International Airport, which allows passengers to complete all immigration, customs and agriculture inspections prior to departure. On reaching the US, they will be treated as domestic arrivals to allow for faster processing.

This step, in particular, will have a “huge impact” on how people view travel procedures to the US, says Klapper. “It can be difficult for some people coming into the US, but we are trying to change that perception and working a lot with our embassies and consulates around the world.”

Around October or November this year, Brand USA is also going to start looking at having a permanent presence in this market, she confirms.

Closer to the GCC, the recent announcement of a bilateral visa-waiver programme between the European Union and the UAE is expected to boost travel between the regions.

While the agreement is yet to be formally ratified, countries in the Schengen area are hopeful of a big impact.

“We are very optimistic about the visa issue and we would now like to have more and more direct flights,” explains Timea Czunyi, representative for the GCC and Turkey at Hungary’s International Market Development Bureau.

“We have seen an increase in UAE tourists, but there’s a greater rise of Hungarians visiting Dubai and Abu Dhabi,” she says. While they have held negotiations with Emirates for a direct route, it is a decision for the future, Czunyi notes.

At present though, the focus – as with other new destinations – is on promoting Hungary and its attractions. The bureau is launching Arabic versions of its Twitter and Facebook accounts and organising study tours for trade agents and the media.

Czunyi stresses that Hungary has the right product for regional travellers: “In Budapest, we have over 5,000 rooms in five-star hotels and they offer high quality service at lower prices compared to neighbouring countries. We also have all the luxury brands for shopping and over 20 malls in the city centre and surrounding area,” she adds.

“We are ready [and just waiting] for them to arrive.”