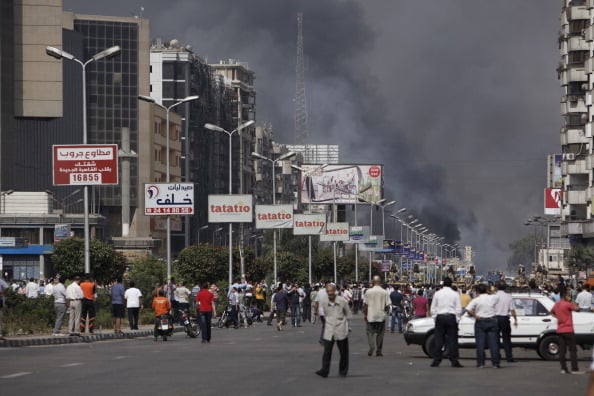 Egypt’s political crisis has dealt a blow to any hopes for a quick economic recovery, but aid from its Gulf allies is likely to prevent a financial collapse.

Clashes between followers of deposed Islamist President Mohamed Mursi and security forces have caused the deaths of around 900 people, the worst political bloodletting to rock Egypt in recent history.

When the army-backed government took over after the ousting of Mursi last month, it hoped to repair the business environment and attract money back to Egypt by improving security, removing logistical bottlenecks and pumping in new funds. That in turn could reduce social tensions by starting to create jobs and raise living standards.

The latest violence may have doomed such hopes for some months at least. If the conflict continues to worsen, the economy could slow further from the anaemic 2.2 per cent growth in the first quarter of this year – a rate already much too low to cut unemployment, officially estimated at around 13 per cent.

“If you see widespread terrorism and bombs, you won’t get a recovery in tourism or domestic investment, and capital flight may continue,” said Simon Kitchen, a strategist with investment bank EFG Hermes.

But after Mursi was deposed, Saudi Arabia, Kuwait and the United Arab Emirates promised Egypt a total of $12 billion in loans, grants and fuel shipments. Of that, $5 billion has already arrived – an unusually fast delivery of aid commitments, showing the importance the Gulf attaches to stabilising Egypt.

That means a balance of payments crisis or a collapse of government finances – which had seemed possible during Mursi’s administration – do not appear to be on the cards.

“To those who have declared they are stopping aid to Egypt or are waving such a threat, the Arab and Muslim nations are wealthy with their people and resources and will not shy away from offering a helping hand to Egypt,” he told state news agency SPA in Jeddah.

Much depends on whether the struggle between the army and the Islamists develops into a protracted armed conflict. Even if it does not, the latest violence is likely to have harmed the economy for some months.

Tourism may not recover before next year at the earliest. In 2010 Egypt attracted 14.7 million visitors, according to the Organisation for Economic Co-operation and Development; in the wake of the 2011 revolution, the number fell to 9.5 million that year before partially recovering to 11.2 million in 2012. The tourism sector directly accounts for about seven per cent of Egypt’s GDP, according to its State Information Service.

In response to the latest violence, European travel agents are again suspending trips to Egypt, while the United States has warned citizens against travelling to the nation.

They are likely to stay open, barring another big outbreak of violence. But even a low level of political unrest or tension in coming months could hurt the Egyptian economy at the margins, by making foreign buyers of its exports more cautious.

Efforts to put Egypt’s catastrophically weak state finances on a sustainable footing may be another casualty. The army-backed government has inherited a budget deficit that since January has been running at around $3.2 billion a month, equivalent to almost half of state spending.

The cabinet expects to be in power only until early next year, when it is to be replaced after planned elections, so it lacks a popular mandate to take big steps to cut the budget deficit. Locked in a struggle with the Brotherhood, it is even less likely to push politically sensitive economic reforms.

“If the violence continues, the government will be even less politically armed to go out and control the budget deficit by reducing subsidies,” said John Sfakianakis, investment strategist at Saudi investment firm MASIC.

Being unable to fix the finances may not matter so much, however, if Egypt can draw on the resources of the Gulf’s wealthy oil exporters, most of which view crushing the Muslim Brotherhood as a geopolitical priority, since they see the group as a long-term threat to their monarchies.

Egypt’s foreign reserves totalled $14.9 billion at the end of June, before any of the Gulf aid announced in July arrived. Excluding inflows of aid, they had been falling by around $1-2 billion every month, so the aid may cover Egypt’s external deficits into early 2014.

By itself, the Gulf aid announced so far only covers a few months of Egypt’s state budget deficit, but confidence created by the aid should help the government finance the rest of the deficit with borrowing. Yields at government Treasury bill auctions fell after Mursi was deposed; they spiked up during last week’s violence, but are still a couple of percentage points or more below their peaks under Mursi.

Most importantly, as Prince Saud indicated, Egypt can count on additional billions from the Gulf if its political turmoil causes fresh capital outflows or delays the transition back to civilian rule.

This should more than offset any potential loss to Egypt if the European Union or the United States cut back their economic and military assistance to Cairo in protest at the killings.

The EU and international financial bodies last year promised Egypt 5 billion euros ($6.7 billion) of grants and loans over several years, but little of that money has actually arrived and much has been blocked because Cairo failed to meet conditions for democratic reform. Washington has provided $1.3 billion of military aid and just $250 million of economic aid annually.

Qatar, which had good ties with the Muslim Brotherhood, spent about four per cent of its GDP helping Egypt before Mursi’s downfall. Back-of-the-envelope calculations suggest Cairo could receive a further $40 billion, in addition to the money pledged last month, if Saudi Arabia, the UAE and Kuwait were to match prior Qatari levels now Mursi has gone. The Saudi government’s budget surplus in 2012 alone was $103 billion.

Even so, such massive dependence mortgages Egypt’s future; much of the aid is in the form of loans, which must ultimately be repaid.

But for now, it gives Cairo room to manoeuvre. The government’s economic planning team said on Monday that it would work to provide financing for the budget and import essential commodities by attracting more foreign investment, especially from Arabs.

It promised to speed up implementation of public-private partnerships, especially to build roads, sanitation and hospitals, and give priority to investment projects that affect the daily life of citizens. Cash from the Gulf may make some of these projects possible.

The resilience of Egypt’s stock market shows how the Gulf aid has kept hopes for the economy alive. The market is down about four per cent since last week’s violence, but it is still up 21 per cent from its low in June.

The gap between the official and black market exchange rates of the Egyptian pound against the dollar, which almost disappeared in the initial weeks after Mursi was deposed, has widened since last week but remains under two per cent. It reached seven per cent or more under Mursi.