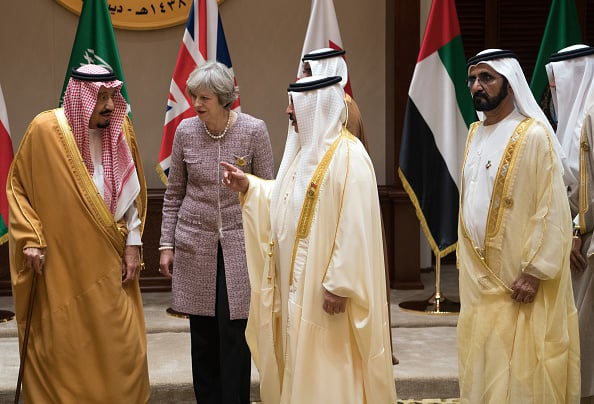 The Gulf Cooperation Council states and the United Kingdom announced a new strategic partnership on Wednesday with the aim of building closer relations in several areas.

The agreement, which formed part of British Prime Minister Theresa May’s visit to this week’s GCC Summit, will focus on politics, defence, security and trade and developing closer ties with a particular emphasis on regional threats.

Among the pledges were to work together to defeat extremists including Daesh and to counter the influence of Iran.

However, there was no direct mention of the country in a statement.

“The UK remains committed to working with GCC states to deter external aggression and interference in their internal affairs contrary to international law and the UN Charter, just as it did during the Gulf War and on other occasions.”

The group also outlined common principles for regional conflicts and shared recognition that politics and peaceful means should prevail over arms.

This included the conflict in Yemen where the UK-GCC statement urged both sides of the conflict to engage with a United Nations peace plan.

The Gulf countries and UK pledged to work together to rebuild Yemen after a settlement is reached.

Other areas of cooperation will include training and military exercises, with the UK currently constructing a new permanent naval base in Bahrain and an army base in nearby Oman.

May was the first British Prime Minister to attend the GCC Summit. Her participation was expected to place a particular emphasis on economic ties as the country prepares to exit the European Union.

“Any free trade arrangement between the UK and the Gulf could unlock significantly more trade and would be the first regional approach that the UK has explored since deciding to leave the EU,” a government statement said before she left for the event.

The UK has identified GBP30bn ($38.2bn) of high-value opportunities for British businesses across 15 different sectors in the region over the next five years.

No new trade deals were announced during the event but a joint statement indicated some progress had been made.

“We will make it a priority, when the UK leaves the European Union, to build the closest possible commercial and economic relationship, and even more closely with business to promote actively GCC-UK economic engagement beyond current levels,” it read.

May also used the trip to announced the UK’s participation in Dubai Expo 2020 and a new scheme allowing British businesses to obtain five-year multiple entry visas for Saudi Arabia.