GCC Stock Markets - On The Rise Or Fall? - Gulf Business 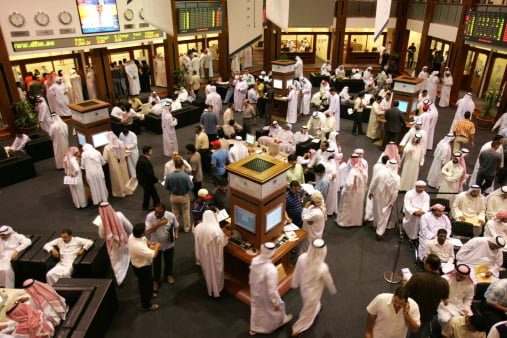 As with the real estate, car and luxury goods markets, the UAE’s equities market has stormed back from its post-2008 low to something of its former strength over the last 12 months.

It’s been a positive transgression for wider Middle East stocks as a whole, with some analysts predicting 2013 will see markets return to more stable ground than at any time in the past five years.

However, just as with the real estate sector, there’s still the most tentative of warnings not to get carried away. Commentators still err on the side of caution when mentioning the words ‘pre- financial crisis levels’.

That said it’s hard to argue with the evidence. At the time of writing, Dubai’s Financial Market closed for the day at 1,939 points, a three-year high. Last year, share trading volumes reached to 600 million shares a day while the emirate’s economy grew 4.5 per cent.

That said the UAE is still stuck in the MSCI Frontier Markets Index, after failing once again to attain emerging markets status last year. Alongside Qatar, that puts the emirates level par with countries such as Kazakhstan, Nigeria and Vietnam, despite having higher per capita incomes than the US.

Peter Cooper, editor and publisher of Arabianmoney.net, highlights the cloudy period the region’s markets currently find themselves in. “2012 was something of a bumper year for global stock markets despite a very lacklustre year for GDP growth,” he said.

“Middle Eastern stock markets delivered some stellar results including Egypt’s rebound from its revolutionary sell-off. The UAE was up 20 per cent, 14th in the world, although the largest bourse, Saudi Arabia’s Tadawul, trailed behind.

“Many major stock markets are now close to their pre-crisis levels even though that is not always the case for their GDP figures. However, that is not true for the UAE or Saudi Arabia. It was only in late January this year that the UAE broke out of a depressed three-year trading range that was 70-85 per cent down on its boom levels of early 2006.

“You could say that is a bit odd because the GCC oil surplus of $350 billion in 2012 was the highest in history and oil revenues are substantially up
on 2006. The GCC is in another oil boom while its stock markets are set close to the levels of the previous crash,” Cooper added.

If the markets were waiting for a litmus test — a large-scale project announcement reminiscent of the boom days for example — than the UAE has certainly provided enough of those in the last six months, with imminent ventures totalling in excess of Dhs16 billion, and that’s not including the Mohammed bin Rashid City project.

But there was no knee-jerk reaction from the stock markets to these large- scale announcements. On the contrary, investors seem confident that the UAE’s growth plans are both realistic and achievable — the litmus test came back positive.

At regional brokerage firm, Mubasher Financial Services, trading volumes in the UAE last year were up 56 per cent on 2011.

Amr Elalfy, global head of research at Mubasher Financial Services, said: “In sharp contrast to the gloomy outlook elsewhere in global markets, Dubai has seen concrete evidence of a rise in investor confidence — as shown by gains in real estate, credit and equities. The recovery of property prices is particularly encouraging, considering the heavy losses this sector incurred in the correction.”

The rise in trading volumes wasn’t exclusive to the UAE. Elsewhere in the region for Mubasher, volume rose 14 per cent in Kuwait, 47 per cent in Saudi Arabia and 156 per cent in Bahrain.

The biggest rise in the Middle East though came from outside of the GCC, with Egypt seeing a 334 per cent rise on Mubasher’s books.

The land of the pharaohs’ stock market defied the country’s on-going political obscurity last year to deliver a 65 per cent return for its investors, making it the second highest performing market globally in 2012.

“That probably came as a huge surprise to most Egyptians but then most new investors were from outside Egypt where confidence in the economic dimension to the recent revolution is far higher than among those who actually have to live with it,” says Cooper.

The same can be said for the bourses of several Gulf states. The GCC’s largest inflows of money have come from foreign investors with more confidence in the region’s recovery than its own residents. Either the Gulf’s investors are too close to the map to see the treasure, or outsiders are happy for ignorance to be bliss.

Malek Kanawati, CEO of Mubasher, said: “Although the region’s recovery is still a work in progress, positive results such as volume growth across key markets will help to instill investor confidence in this region.

“It is becoming increasingly apparent that the positive start to the year is not merely the tail end of a spike from 2012, as was first feared. The region offers a lot of untapped potential.”

The rosy predictions must be taken hand-in-hand with what the regional and global markets have endured over the last five years where the unique circumstances of the 2008 crash were part of what made it so prolific.

“I do not believe the 2008 crisis should be viewed as a ‘regular’ cycle. It actually represents a discontinuity from the previous decade,” says Dr Yuwa Hedrick-Wong, global economic advisor at MasterCard.

“The rise of emerging markets, especially the hype associated with the BRIC countries, over the period from roughly 2000 to 2008 is driven by unprecedented increase in global liquidity and especially private capital flow to developing countries.

“For emerging markets, it appeared as if just being called an emerging market was enough to drive economic growth. The BRIC countries themselves have nothing in common; their interests are actually mutually contradictory.

“Instead of behaving like the herd that they were, global investors are now more cautious and more worried. The criteria for future success for emerging markets will be more exact and demanding compared with the previous decade. Given weakened global demand exports from emerging markets will be increasingly differentiated in how investors view them.

“History suggests that the current state of uncertainty will take time to subside. And persistent uncertainty means volatility in equities,” Hedrick-Wong added.

If understanding the current markets is an uncertainty, predicting future movements is near impossible. While continued growth may seem predictable, especially for the UAE’s bourse − despite what MSCI suggest − much will depend on the behaviour of global markets and the region’s ability to protect itself from anything violent.

“Stock markets are seldom easy to read. There is often a disconnection between economic reality and share price movements,” says Cooper.

“In this climate stock markets ought to be in free-fall as the outlook for profit growth is dismal. What is holding stock markets up and causing them to rise? The only obvious candidate is the printing of money by global central banks through their quantitative easing programs.

“That money has to go somewhere and it seems to be inflating global stock markets. It is also supporting oil prices at very high prices by comparison to the poor global economy and that is good for the oil states, so I suppose you would have to conclude that the bourses in these countries could well have a lot further to rise, especially where they are still trading much lower than in the last oil boom as in the UAE and Saudi Arabia.”

“We don’t know what the unforeseen consequences of all this money printing by central banks to keep interest rates low when they ought to be far higher will be,” Cooper added.

“Higher inflation and a bond market crash are probable future scenarios with very bad consequences and neither would be good for equities. The idea of a smooth rotation from bonds back into equities is the stuff of Wall Street fantasy.

“Markets move from booms to busts, not in smooth lines, and that much we know from bitter experience. My guess is that we will eventually get a huge dot- com style bust in global equity markets within the next five years, but timing it is impossible.”