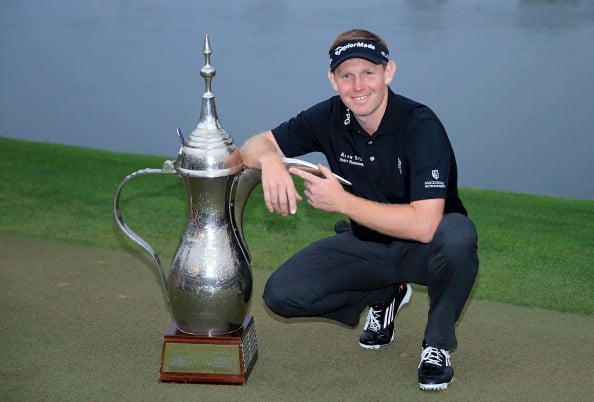 Scotland’s Stephen Gallacher struck a final round 72 to clinch the $2.5 million Dubai Desert Classic on Sunday as he overcame a nightmare start to become the first player to retain the coffee pot trophy.

Gallacher, whose Dubai win 12 months ago was his first title in nearly a decade, skittered four bogeys on the front nine holes, but clawed back four shots after the turn in a gritty display to end on 272.

“My emotions are gone, I’m a nervous wreck,” the world number 67 told reporters.

“I never really played the front nine that well all week.

“No one was racing ahead, that was the key, if someone had come out of the traps maybe it would have been different.”

Gallacher, 39, began the day two shots clear of world number six Rory McIlroy and most of the 8,500 crowd must have anticipated a classic duel between the wily veteran and golf’s great young hope.

But both players faltered on an overcast Majlis course, although that made for a thrilling finale as four different players – Gallacher, McIlroy, Koepka and Grillo – claimed outright leadership at some stage, while England’s Robert Rock and Finland’s Mikko Ilonen also shared top spot.

Gallacher hit his first two drives into the rough to begin with successive bogeys and gift playing partner McIlroy the lead.

Yet the Northern Irishman failed to capitalise. He slugged his tee shot at the par-three seventh into the water for a bogey and dropped three further shots between holes 10 and 13, dooming his hopes of ending a 14-month title drought on the European Tour as he slipped to a share of ninth.

“The greens were firmer. The rare times I did get the ball close I didn’t make any putts. It was one of those days.”

Gallacher, in contrast, was a man transformed after the turn, where a day earlier he had equalled a European Tour record with nine-under-par on the back nine.

“I think yesterday was the key – Saturday is when you’re trying to get into contention, to get a lead,” said Gallacher.

He did not quite reach the same heights on Sunday, but a chip from the rough on the 17th provided a one-foot birdie chance he duly converted to reclaim the outright lead, making par on the 18th with a nerveless three-foot putt to seal the title.

Gallacher is one of golf’s late bloomers, rising from 461 in the rankings in 2010 to be on the cusp of the top 40 following back-to-back Dubai titles.

Now with three tour victories to his name, he has narrowed his sights on playing in September’s Ryder Cup, which will be held at Gleneagles, around 65 kilometres from his home.

“I wouldn’t want to get too far ahead of myself, but my uncle played it eight times, captained it three and vice-captained it two, so it’s pretty much what I grew up watching,” said Gallacher, referring to Bernard Gallacher, who skippered Europe’s 1995 winning Ryder Cup team.

“For my generation it’s never going to be in Scotland again. It’s always been a long-term goal to play in a Ryder Cup, it just so happens that the best spell I’m having is when it’s in Scotland. There’s seven months to go, a lot of golf to be played and a lot of good golf is needed to get in.”