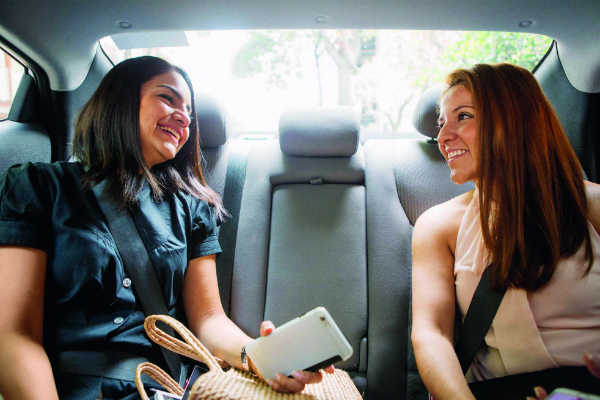 Urban mobility is increasingly becoming a buzzword in big global cities like Dubai, and rightly so. As more and more people migrate and settle in densely populated urban centers it’s important that cities tackle the issues of how people get around in a safe, convenient, and affordable
way. Just buying a car is no longer the status quo.

Let’s jump into the numbers a little bit to start setting the context and understand where we are today. Right now, there are more than a billion cars in the world – that’s more than the combined populations of Europe and the US. In Dubai alone, we’ve seen the number of vehicles double to over 1.4 million in recent years, with an average annual increase of 8.2 per cent.

But what we need to look more closely at is not the number of cars, but rather how they are used. The vast majority of trips are taken individually. The next time you’re at the traffic lights, have a look around and in most cases a car will just have a driver and no one else.

Cars also sit idle for 95 per cent of the time, often in inner city parking garages or on neighbourhood streets. In the US, a fifth of the land area is dedicated to car parking, that equates to an area roughly 12 times the size of New York City. The opportunity cost is significant; these spaces could be used for parks, schools, hospitals and all manner of community focused buildings and spaces.

A car produces a huge amount of emissions; a staggering 22 per cent of all carbon emissions globally come from cars. In Dubai, the figures are just as startling. For every two Dubai residents, there is one car, meaning vehicle density in Dubai is higher than some of the biggest urban centres in the world. Add to this the estimated 450,000 surplus vehicles that enter Dubai each day and this inevitably leads to higher emissions and more congestion issues.

In 2016, drivers in Dubai spent an average of 29 hours stuck in congestion, an issue which the Road and Transport Authority (RTA) has identified and taken a revolutionary approach to alleviating through the development of a world-class, integrated transport network. At Uber, for example, we work closely with the RTA to find sustainable transport solutions for the city, and encourage more people towards public transport and away from car ownership.

So where did these issues stem from? People are pushed to own cars by urban design. In a recent study, The Brookings Institution found that 30 per cent of jobs in the US had a 90-minute public transit journey and in cities such as Miami only 16 per cent of jobs can be accessed via public transit. People are literally being forced into car ownership due to the environment they live in.

This creates huge opportunities for cities to image a new landscape, one in which roads are less congested and vast swathes of land aren’t dedicated to storing idle cars for huge portions of the day.

Through our work with the RTA to study new mobility options to support Dubai Vision 2021, we see one simple solution is to put more people in fewer cars and provide viable first/last mile options. Part of this equation is also shared-use mobility. If everyone shared a trip to work, we believe the number of cars on the roads could be lowered substantially. And imagine if people shared this trip to their closest metro stop, and then used the metro to complete the rest of the journey. By providing a pooled, first/last mile solution, we can collectively reduce the number of miles driven and the time spent frustrated in traffic.

But for pooling to happen we first need to build a reliable and affordable ride sharing network that gives people access to a transportation option they can use as a substitute to owning a car. Cities that have embraced this paradigm shift are starting to see the results in their districts and on their roads. We’re already seeing attitudes to individual car ownership begin to change. When given an affordable and reliable alternative people are happy to take it. In the US, 10 per cent percent of Uber riders under 30 say that they’ve either given up their car or are no longer planning to buy one.

But it’s not ride-sharing alone that enables this shift in behavior; our data shows that Uber by itself does not substitute for private car ownership. In urban environments with walkable, bikeable neighbourhoods and a healthy public transit infrastructure, the growth of shared mobility can enable residents to leave their cars at home (or give up car ownership altogether) and choose the transportation options that fit their needs at any time of day or night.

By moving more people towards shared mobility modes, Dubai and other cities can expect to see a significant improvement across several different areas. With fewer kilometers being driven, there are fewer CO2 emissions and huge fuel savings. But we are only at the start of this change. According to a recent report by Morgan Stanley, ride hailing currently accounts for just 4 per cent of total trips driven – a figure that is forecast to increase to 25 per cent by 2030.

At Uber we have seen extremely promising developments, with the UberX pilot resulting in an increase of pickups and drop offs at metro stations, an increase in trips starting and ending in transport deserts (areas not on the metro line) and big improvements in vehicle utilisation.

So things are changing, as we all work to lay the foundations for a smart, sustainable, fully integrated vehicle network that smart cities of the future are striving for.

We want a brighter, greener, congestion free future for Dubai and we will keep working hard to make this a reality for the people of the city.