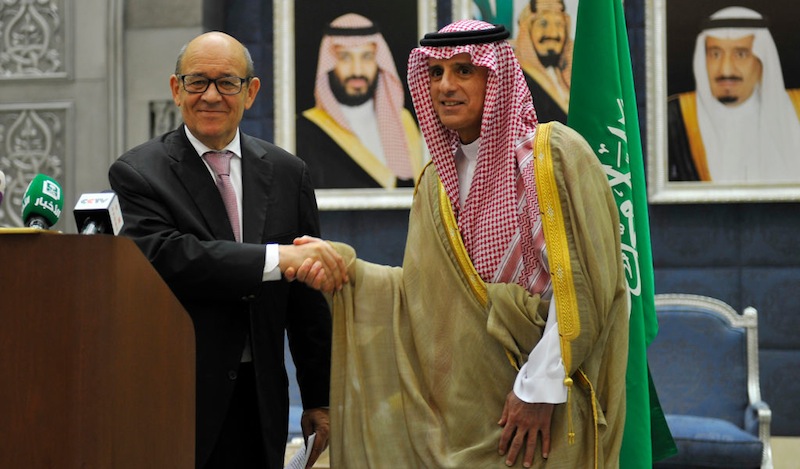 France called on Saturday for a swift lifting of sanctions that target Qatari nationals in an effort to ease a month-long rift between the Gulf country and several of its neighbours.

“France calls for the lifting, as soon as possible, of the measures that affect the populations in particular, bi-national families that have been separated or students,” French Foreign Minister Jean-Yves Le Drian told reporters in Doha, after he met his counterpart Sheikh Mohammed bin Abdulrahman al-Thani.

Le Drian was speaking alongside Sheikh Mohammed, hours after his arrival in Doha.

He is the latest Western official to visit the area since the crisis began.

Later in the day he flew to Jeddah, where he repeated his concerns about the effects of the standoff in a televised press appearance with Saudi Foreign Minister Adel al-Jubeir.

Jubeir said any resolution of the worst Gulf crisis in years should come from within the six-nation Gulf Cooperation Council.

“We hope to resolve this crisis within the Gulf house, and we hope that wisdom prevails for our brothers in Qatar in order to respond to the demands of the international community – not just of the four countries,” he said.

He reiterated that Qatar should not support terrorist groups and their financing or host their members and should end incitement through the media.

Qatar has repeatedly denied such accusations and rejected demands to close down the Al Jazeera network as initially requested by the boycotting states.

Le Drian, who will visit the UAE and Gulf mediator Kuwait on Sunday, follows in the steps of other world powers in the region, including the United States, whose Secretary of State Rex Tillerson sought to find a solution to the impasse this week.

Officials from Britain and Germany also visited the region with the aim of easing the conflict, for which Kuwait has acted as mediator between the fending Gulf countries.

In a joint statement issued after Tillerson and Sheikh Mohammed signed an agreement on Tuesday aimed at combating the financing of terrorism, the four Arab states leading the boycott on Qatar said the sanctions would remain in place.

They also reinstated 13 wide-ranging demands they had earlier submitted to Qatar, the world’s biggest producer of liquefied natural gas, as a condition for removing sanctions.