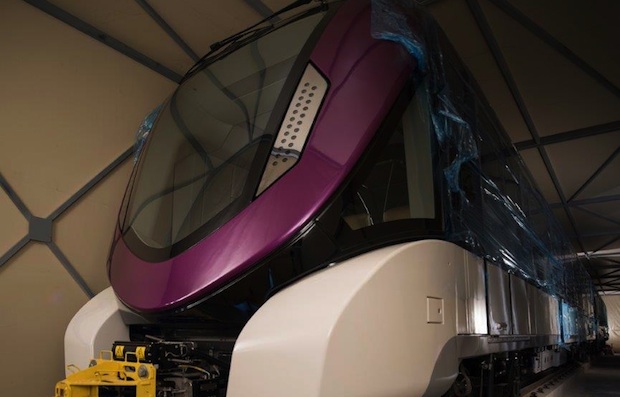 French firm Alstom has handed over the first of 69 metro trainsets for the Riyadh Metro lines 4, 5 and 6 to the Arriyadh Development Authority (ADA), it announced on Monday.

Composed of two cars each, the Riyadh metro trainset is 36 metres long and can accommodate up to 231 passengers.

The interior and exterior aesthetical design has been developed as per ADA’s specific requirements, Alstom said.

The exterior car body features painted stripes that indicate the color of the line the metro trainset will circulate on.

The metro trains are 100 per cent motorised, allowing them to run on gradients of up to a 6 per cent slope. They are designed to run on standard-gauge track at a top speed of 90 km/h.

They have also been developed to cater to the region’s climate and include an air conditioning system that is capable of delivering sufficient cooling capacity even in extreme heat.

The bogies, traction drive, brakes and doors have also been fitted with special elements in order to prevent sand entering, the statement added.

Alstom, as part of the FAST consortium, won the deal to supply a full integrated metro system for lines 4, 5 and 6 (or Yellow, Green, and Purple lines).

The metro trainsets are being produced in Alstom’s factory in Katowice, Poland.

The $23bn Riyadh Metro project, scheduled to be completed by 2019, hopes to transport up to three million passengers and serve as the backbone of the public transport system in the Saudi capital city.

In February, officials from ADA confirmed the project was 48 per cent complete and on track to begin operations in 2019.

The project’s 190 driverless trains are being manufactured by Germany’s Siemens, French firm Alstom and Bombardier of Canada.