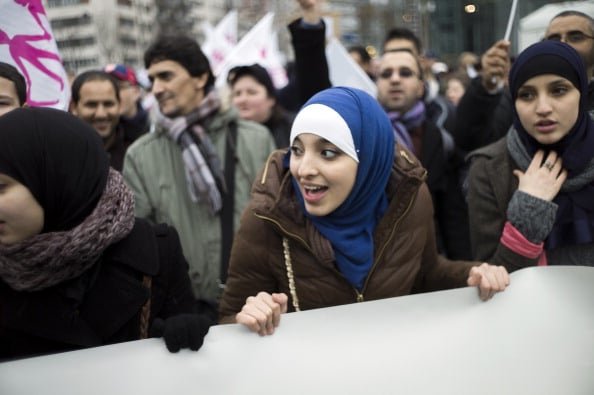 France’s official council promoting integration has struck a raw nerve by proposing that Muslim headscarves, already banned in the civil service and state-run schools, also be outlawed at the country’s universities.

The High Council for Integration, in a confidential report leaked to Le Monde newspaper, said this was needed to counter problems caused by students wearing religious garb and demanding prayer space and special menus at universities.

France’s 2004 ban on headscarves in schools and 2010 ban on full face veils in public have alienated many of its five million Muslims. Rioting broke out in a Paris suburb last month after police checked identity papers of a fully veiled woman.

“This is one more step in the legal stigmatisation of Muslims,” the March 15 Liberty Committee, a Muslim group opposed to the school headscarf ban, said on Tuesday.

“The separation of church and state cannot be reduced, as some want it to be, to an arsenal of laws against Muslims.”

Several politicians also weighed in, warning a new ban could fan tensions between the Socialist government, which stands for a strong defence of France’s official secularism, and Muslims who feel such laws are aimed at isolating and punishing them.

“We have to find the right balance between the need for neutrality in the public sphere and the personal choice to express a religious conviction,” said Herve Mariton, a deputy for the opposition UMP party.

Government ombudsman Dominique Baudis said a new ban “may not be necessary” but France must clarify its laws on “laicite”, the official secularism that has led to repeated conflicts with minorities challenging it as a violation of religious rights.

Defending secularism is a rallying cry that resonates across the political spectrum, from left-wingers upholding the liberal values of the Enlightenment to far-right voters seeking a bulwark against the growing role of Islam in French society.

President Francois Hollande launched a new Observatory of Laicite in April and asked it for new ideas on how to apply a landmark 1905 law that aims to shield the public sphere from religious pressures while respecting freedom of religion.

Under French law, religious wear is banned in schools to protect youths from faith-related pressures but tolerated in universities because students are adults with free choice.

Extending the headscarf ban to universities would contradict this basic principle and could lead to further protests from Europe’s largest Muslim minority.

Le Monde said the High Council report cited “numerous complaints from all sectors of university life” about religious activity including proselytism and students refusing to work with members of the opposite sex.

While most complaints clearly referred to Muslims, it said there were also evangelical Christian students who rejected the teaching of evolution or reading such famous free-thinking French philosophers as Voltaire.

Le Monde called the report alarmist and polemical and said it gave neither precise figures for the total of such complaints nor the names of the universities said to be involved.

The High Council declined to comment on the confidential text, saying only that it would be published in its annual report at the end of the year.