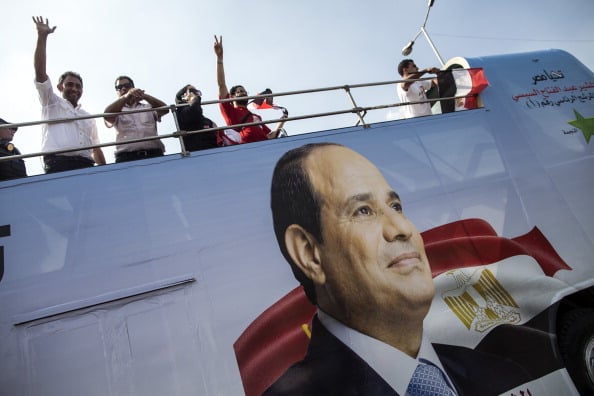 Sisi has been widely regarded as Egypt’s de facto leader since he toppled Islamist President Mohamed Mursi last July and cracked down on his Muslim Brotherhood in the bloodiest chapter of the country’s modern peacetime history.

He has acknowledged the scale of Egypt’s problems, including an energy crisis and Islamist militant violence that has driven away foreign investors and tourists, hammering the economy.

“The challenges present in Egypt are so many,” he told Reuters in an interview this month. “I believe that within two years of serious, continuous work we can achieve the type of improvement Egyptians are looking for.”

Sisi’s sole competitor is Hamdeen Sabahi, a leftist politician who finished third in the 2012 election which brought Mursi to power. Polling stations open at 9 am (0600 GMT) and although the result appears a foregone conclusion, a big turnout would be seen as a strong mandate for Sisi’s rule.

Supporters regard Sisi, who resigned from the military earlier this year, as a decisive figure who can stabilise Egypt, a strategic U.S. ally in the heart of the Arab world. His opponents, mostly in the Islamist opposition, say he is the mastermind of a coup that robbed Egypt’s first freely-elected leader of power.

They fear Sisi will rule Egypt with an iron fist just like other former military men did, and say he will protect the political and economic interests of the generals and businessmen who amassed fortunes before the 2011 uprising which toppled autocrat Hosni Mubarak but remain influential.

Security forces have largely driven the Brotherhood underground after hundreds were killed and thousands arrested. More than a thousand Brotherhood supporters have been sentenced to death on charges including inciting violence after the army overthrew Mursi.

Foreign governments condemned the rulings but none has taken concrete steps to pressure Egypt into improving its human rights record.

Members of the pro-democracy movement that led the protests against Mubarak in 2011 have also been jailed, and many cases of torture by the security services have been reported by human rights groups.

Sisi must tread cautiously. Abuse by police was one of the triggers for the 2011 revolt. Although supporters hailed Sisi as a hero when he removed the Brotherhood from power, there is growing discontent over rights abuses in the streets.

Secular activists have become more vocal since the security crackdown against Islamists was expanded to include liberal groups, including the April 6 movement which helped to start the 2011 uprising but has since been banned.

On Saturday, hundreds of people marched through downtown Cairo calling for an end to what they called military rule.

“Down with the military regime! The voice of the revolution is coming from the streets and the factories!” screamed mostly young men and women.

“Bread! Freedom! Social justice!” they chanted, echoing more of the rallying cries of the 2011 uprising.

Mahmoud Omran, a 23-year-old student who spent four months in Cairo’s Tora Prison after participating in street clashes in 2011, called the election “pointless”.

“Why vote? No matter what percentage Sisi wins by, he will be president after spilled blood,” he said.

Though Sisi’s support appears to be shrinking, many Egyptians worn down by three years of political turmoil still view him as a hero for ending Mursi’s divisive time in office.

“Sisi saved us from the Brotherhood and what they were doing to us,” said Ibrahim, 47, who works for an import-export company in Cairo.

Monitors from the European Union and U.S.-funded Democracy International are observing the vote, and more than 400,000 security forces have been deployed to secure polling stations across the country.

Sisi secured 95 per cent of votes cast in advance by Egyptians overseas, but an opinion poll by the Washington-based Pew Research Center suggests a more mixed picture inside Egypt, with Sisi viewed favourably by 54 per cent and unfavourably by 45 per cent.

The Muslim Brotherhood and its Islamist allies have vowed to escalate a “revolutionary wave” this week, though it has been many months since they were able to mobilise large numbers in the streets. The Brotherhood has urged its supporters to boycott the election.