The 11th edition of the bi-annual DIFC Art Nights will take place at the Gate Village in Dubai International Financial Centre on April 1-2 from 6pm onwards.

A total of 10 galleries will be showcasing their work, comprising the creations of over 40 artists, presented within the outdoor public areas of DIFC.

The upcoming DIFC Art Nights will be held under the theme of hope and positivity – one that has been coined against the backdrop of the all-encompassing pandemic that has resulted in several disruptions. It has also been a period when the UAE has resolutely confronted the fallout of it. A big win for the country was the Hope Probe successfully inserting itself into Mars’ orbit earlier this year. One of the key installations at the upcoming Art Nights is a set of LED astronauts hung off the facade of the Gate Village buildings facing the Gate Village public spaces. 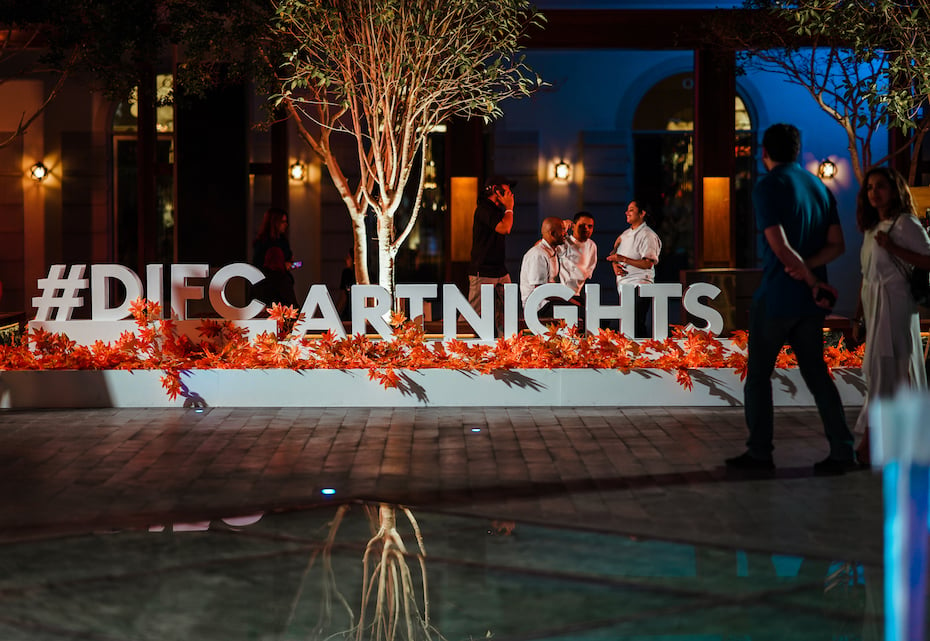 Adding on to the theme of this year’s art event, was the  announcement of the Hayat-Vax Covid-19 vaccine which would be manufactured in the UAE that has lent much hope and positivity to several countries that are in dire need of the vaccine.

Art Nights will coincide with the Dubai Art Week where DIFC is hosting the ongoing Art Dubai, the region’s biggest art fair. Art Dubai, which began on March 29, will end on Saturday, April 3 and is being held at an all-new purpose-built venue at the Gate Building within DIFC.

DIFC is a permanent home to several top galleries including Sconci Gallery,Opera Gallery and Tabari Artspace, among others. Apart from the galleries, there are several permanent art sculptures on display too within this financial district.

The free-to-attend event aims to encourage as many members of the community to attend this event. For those who do make it, here are five artists and their works to watch out for: 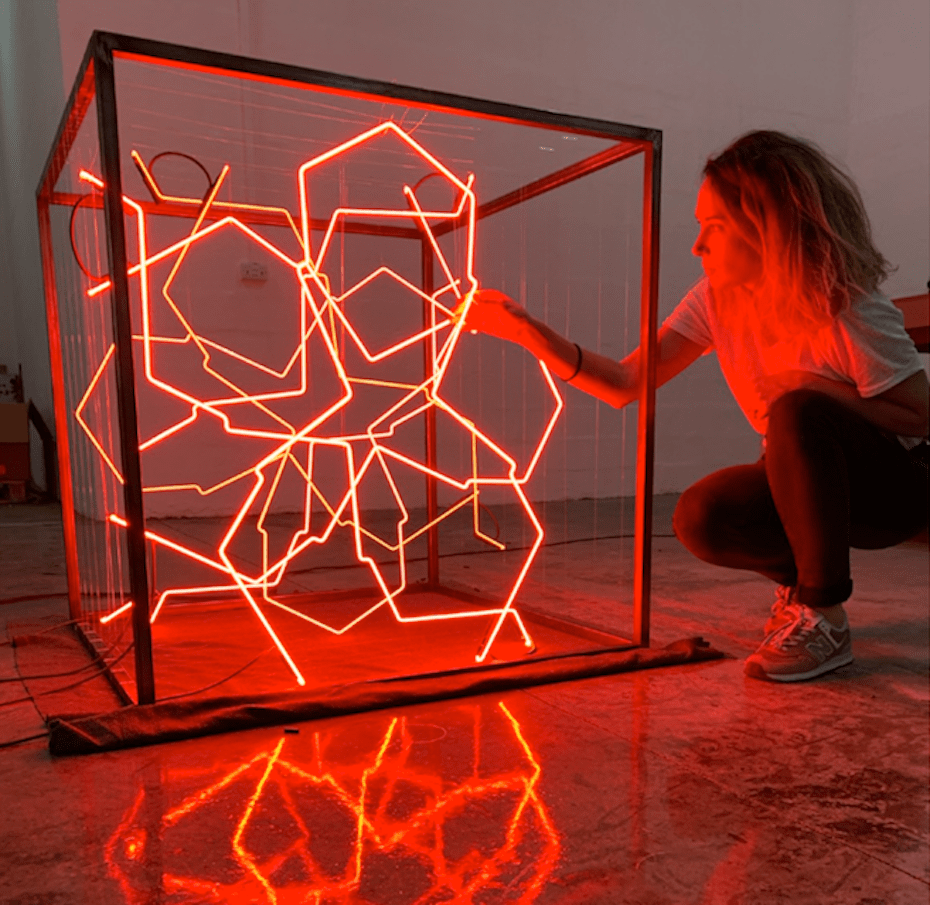 The Cube represents a well-known Arabic pattern called mashrabiya. Due to its perspective, The Cube shows the complexity of the Arabic Culture often seen and judged from one angle in the world. But for the artist, this culture is discreet and founded on several layers, with each neon tube representing some of the most important aspects of the Arab society and depicting intricate shapes, like human shapes, showing how this culture is bringing a whole community together.

The artist’s idea is to express the sky above in different places over the world with everyday used plastic bags. As a result of the pandemic, the sky has come to symbolise hope, humanity, solidarity and unite people across the globe – a shared common experience in isolation. Simultaneously, the sky also looks different depending on where you are located.

After the Emirates Mars Mission Hope Probe returned its first picture of Mars, de Belle was inspired by the magic and the mysteries of the universe to create this intricate neon art piece. It is also a homage to Hazza Al Mansouri, the first Emirati astronaut in space. It celebrates human life beyond earth and the fact that space isn’t as dark as we think – it’s filled with unexplained lights.

The mesmerising and playful movement of the reflective strips stimulates a multidimensional interaction between people, environmental energy, and architectural context. This site-specific installation emphasises the presence and movement of people and metaphorically celebrates a dynamic culture by reflecting visual diversity in a contemporary environment.

A collaborative installation by Hamzat Wasl, Amal Al Sahlawi and Saeed Al Madani, it portrays discovery in times of change and transformation. Here the artists explore the notion that during times of change, we tend to fall prey to our subconscious and are easily subject to acts, behaviours, deeds and sins driven by our subconscious, as puppets would. The question therefore lingers whether the conscious mind is the afterimage of the journey endeavoured, and if the imprints we create are to matter to the situation we are put through. 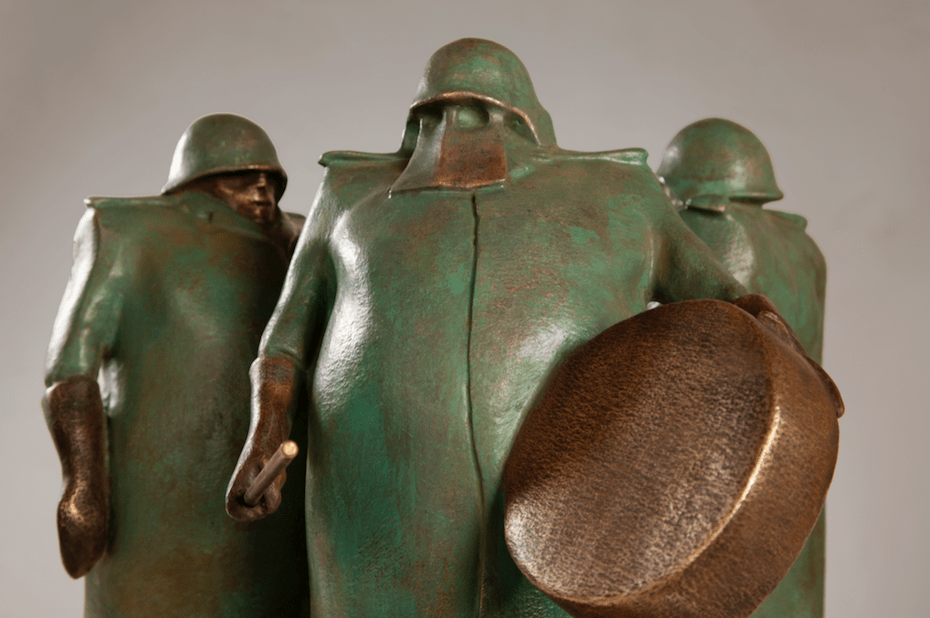 Kubaisy intends to create sculptures that depict what one can refer to as deliberate and insolent terror and intimidation, by which he endeavours to magnify shapes and features of his characters – presenting a sarcastic take on the arrogance of their behaviours. He attempts to depict them as merely cartoon characters with puffed bellies and swollen jugular veins, wearing hats and coats that conceal their physical deformities – all the while with their beings harbouring evil schemes.

For more details on the DIFC Art Nights, click here