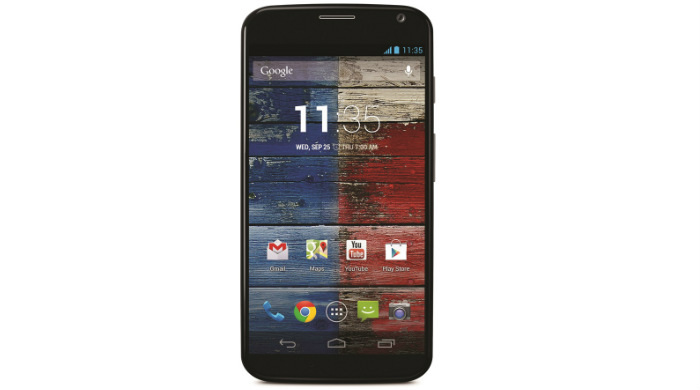 The emphasis on sound and visual seemed appropriate for this mid-priced model (Dhs1,599, distributed by Redington), which makes a big play on touchless controls and quick-capture images. The 4.7-inch HD model will be available in black or white from June.

After saying “OK Google Now”, the phone can help with tasks such as finding directions, setting an alarm or opening YouTube, and an Active Notifications feature is designed to help you act on, or ignore, different messages.

There’s no more grappling for the image button either, as after two turns of your wrist, you can take photos by touching anywhere on screen (hold your finger down for up to 200 bursts).

The features look attractive enough, but will they be enough to tempt customers of Apple, Google or Samsung, all of which offer voice recognition and image capture capabilities? Motorola hopes so, and a Migrate function makes it possible to transfer contents from your old phone onto your Moto X. Motorola Assist is another application designed to help with regular tasks.

Frost maintains that consumers are “poorly served” and its all-day battery will be another feature it hopes will tempt buyers. “Talking to consumers, they were getting frustrated about their devices’ battery life – it’s not that mobile anymore,” he said.

Natural wood teak and ebony backs are designed to give the model added appeal. Alongside the phone’s 16GB memory, a two-year promotion sees a further 50GB bundled in.