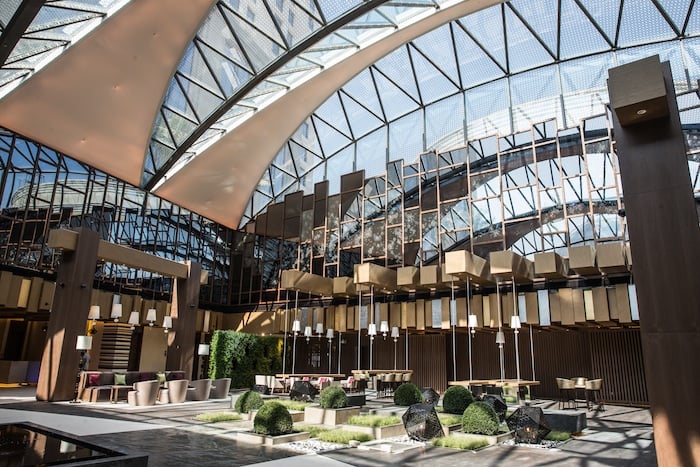 The two-tower complex – split between 464 hotel rooms and 405 apartments – overlooks Dubai Healthcare City and is managed by Wasl. It is Hyatt’s third property in the vicinity, a stone’s throw from Grand Hyatt Dubai and not far from Park Hyatt Dubai across the Creek. You can just make out the Hyatt Regency Dubai in Deira from the upper floors too.

Close to the airport and not far from Downtown, the hotel will appeal to business travellers who may be on tight timeframes and for whom business is more of a priority than beaches.

The entrance is at the back off the main road, and walking up into the lobby, your eye is quickly drawn to the plentiful plant arrangements in the centre and side. It isn’t the first hotel to go down the botanical route – you needonly see the recently opened Sheraton Grand and Sofitel The Palm, among others – but I can’t recall one which has embraced the concept so wholeheartedly in the lobby, and indeed, throughout the rest of the property (covers 700sqm in all).

The level of greenery, inspired by pergolas, seems to have come at the expense of the seating (50) but it is a large space, and beyond are a series of artistically hanging tables – the middle ones will be used for food displays such as afternoon tea. At night, crystals at the back will change colour and three 12-metre arching canopies are the design features on the ceiling, interspersed with natural light. A water feature will also be available towards the front.

Overall, designers KCA International have created a contemporary business hotel which is pleasant on the eye, although occasionally I felt over-designed.

Unlike most city hotels, where services tend to be accessed via lifts, the key elements – MICE/ballroom in the basement, the lobby level and second floor leisure facilities – are accessed via escalators at the rear, which is a little unusual (peer over to the bottom if you’re bold enough), but it should provide a dynamic feel with people coming and going.

Reception desks, illuminated against dark floral motifs, are located to the left of the lobby (one for Hyatt Gold Passport members) and beyond in the corner is the Market24 deli, open for travellers who want no-fuss grab-and-go eats and drinks anytime of the day. More bold interior designs can be found with the aubergine-coloured aerial feature and another floral display around the corner (and more plants by the entrance).

Nearby are five hotels lifts, with two more behind for VIPs, while Residents have their ownlift on the other side.

All four F&B venues are located on the lobby level, although only two – Market24 and the Sufra all-day-dining restaurant – will be open initially, with an authentic, party-oriented Mexican (live music at weekends) and undecided last venue to follow.

General Manager Mathieu Greppo said its main focus is corporate and MICE business with facilities covering 3,2000sqm. The ballroom can host 450 for dinner or 800 theatre style and meeting suites range in size from 41 to 157sqm.

“We really have to capture that business,” said Greppo. “The main focus on F&B is the events department. Together with the Grand Hyatt, we have over 8,000sqm. We want to join efforts and target groups together and that way we have rooms spare for regular corporate customers.”

In this respect, it will compete head on with IHG’s cluster, the InterContinental, Residence Suites and Crowne Plaza, on the other side of the Creek – although its focus will be more on the Healthcare community on its doorstep.

Al Manzil, the event residence concept similar to the Grand Hyatt, is under construction with three identical rooms (office, dining, living) on each side. But unlike theGrand Hyatt, it is attached to the conference centre – and it’s larger – and you can access from the front on the lower level.

In-room connectivity looks strong. Alongside free wifi (Hyatt is introducing free wifi across all hotels from mid February), rooms have discreet media hubs containing HDMI, headphones, Bluetooth and two USB sockets. The Bluetooth enables you to connect your phone or tablet to the TV (it flashes blue for 15 seconds for you to connect).

“We have installed wifi access points for each room and corridors, so your speed is more consistent and connection less likely to drop,” said Greppo.

I saw two rooms on the eighth floor, a standard 38sqm, on the Creek side, and more spacious Deluxe room spanning 52sqm, on the other, offering Burj Khalifa and Sheikh Zayed Road skyline views. The standard’s bathroom was noticeably tighter on space but even that had a good-sized rainshower, tub and long mirror – and the suite has the wow factor of a TV in the mirror. Corridor carpets are muted beige, silver and yellow in the hotel and greyish in the apartments tower.

Full marks for the free minibar too, offering soft drinks/snacks (alcohol can be delivered but chargeable).

The 32nd floor linear Club Lounge has more design touches – wooden slatted ceiling and lime green tables – and offers striking views of Creek Park and the Creek. It is open to guests staying in the 76 Club Rooms and 76 suites.

The leisure offering is impressive for a city hotel, if it’s not quite in the same league as the Grand Hyatt, with a main gym, snaking round offering Creek views, open to men and women and separate facilities and eight treatment rooms. There’s separate stretch areas, lounge, kids area and pool outside with swim-up bar and Jacuzzi, and another smaller pool, with a kids pool, in the Residence. The women-only areas are clearly targeting the GCC market.

Unquestionably the boldest features are at the very top, with the two-floor Royal Suite, each one spanning over 900sqm and containing three bedrooms, kitchen, butler’s/maid’s room, dining room and Majlis area with 60-inch TVs. The lower floor has a 360-degree terrace, which can be hired for events, and the top one features extraordinary high ceilings. Such are their size that they can be partitioned off. Rates will be in the range of Dhs50,000 a night.

Apartments are for sale on freehold – the first phase has reportedly been sold out – and residents have the choice of whether to opt in or out of hotel services.

All in all, the Hyatt Regency Dubai Creek Heights looks a strong addition to the city’s five-star scene and certainly bolsters Hyatt’s position in the central city market.