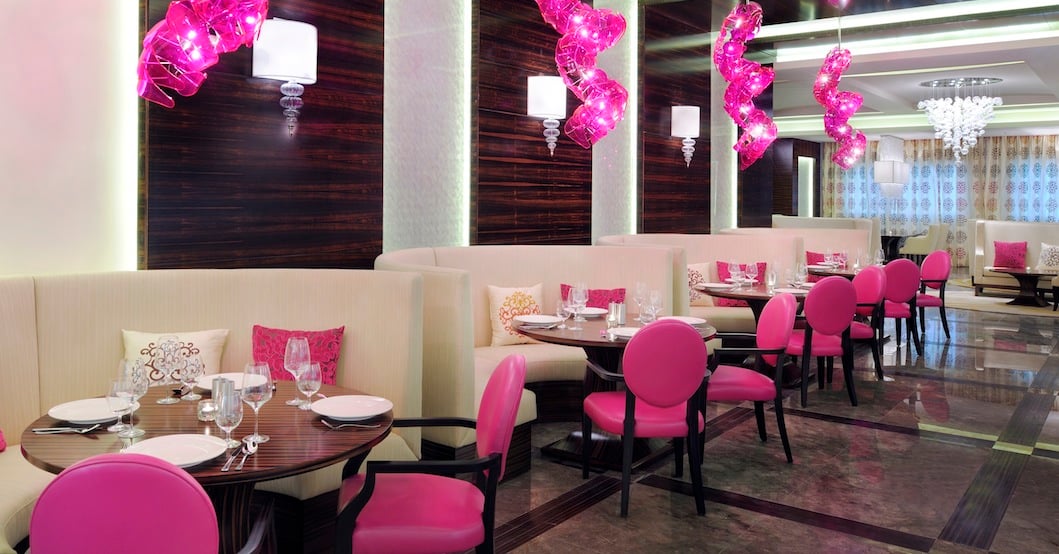 Yesterday’s first look around Dubai Marriott Hotel Al Jaddaf, which aims to open near Dubai Healthcare City on Oud Metha Road in February, provided us with a glimpse of the brand’s new standards, a process which began last year and  is continuing globally.

As you’d expect, there’s more of a contemporary feel from top to bottom, and I imagine the improvements should be welcomed by most travellers as they blend space with intimacy, elaborate designs with minimalism – so there’s something for everyone. A subtle Arabic theme runs throughout, with Mashrabiya designs in the public areas, rooms and ballroom.

With business and leisure increasingly two sides of the same coin, there’s a conscious lifestyle feel to the hotel – and it’s certainly a world away from most city Marriotts older travellers may have experienced in previous years. Water trickles down baubles in the lobby, flows around and through at least two of the restaurants and can be clearly seen in the two linear pools.

This is a ‘two-in-one’ property combining hotel rooms (352) and Marriott Executive Apartments (128, comprising 42 one-beds, 68 two-beds and 18 three-beds) – which enables Marriott to target short-stay executives with business in and around central Dubai, and long-stay guests on contract work – and there should be plenty more of those as the city gears up for Expo 2020.

While Starwood has its ‘hub’, Marriott is now rolling out its ‘Great Room’ lobby, essentially they are the same, targeting guests who want to work and relax. Different seating is available for those on one-on-one or group meets, and are perfect for those who don’t have time to book a meeting room, or want the formality.  A mezzanine level is another meeting area and was a novel touch.

Away to the right is reception, with five desks, with space in between them to foster guest interaction, and nearby is a business centre. The lofty ballroom beyond can hold 880 theatre-style and 500/550 for round-of-10 dinners and can be partitioned into five sections, and it’s complemented by eight  meeting rooms (four can open up into larger rooms) that feature Bose sound systems.

Rooms were a good size, ranging from 40sqm-140sqm, and had all the present-day amenities you’d expect, and if budgets afford, the executive suites looked most comfortable with separate lounge and working areas. Abstract art brightens up the corridors.

Striking panoramic views of the Dubai skyline are available from the eighth floor pool and separate gyms are also available for hotel and resident guests.

Not all the F&B was available for viewing, but the venues we did see looked appealing. The all-day-dining international Market Place, which can hold up to 210 diners, bleeds into the 24-hour lobby lounge on the left of the lobby and has attractive birdnest lighting and soothing water feature; upstairs the Italian Merletto is a blaze of pinks and dark woods (pictured top) while Shanghai 30, themed on the prohibition period of the city in the 1930s, contains sparkling lighting (and another water feature). Scots American Grill will open in the fourth quarter.

On the constantly thorny issue of internet charges, it’s free for Marriott Rewards Gold and Platinum members although for all others, it will cost AED25 an hour and AED100 a day; Graeme Lunn, Director of Marketing, says for most corporates, internet will most likely be bundled into their overall rate.

Marriott believes its location is a ‘hidden gem’, as it’s not far from Healthcare City, Business Bay and DIFC, as well as the international airport, and motorists can find it easily as it’s adjacent to Al Khail Road. Apartments are likely to cost around AED145,000-150,000 a year, rising to 190,000-200,000 for two-bedrooms and AED240,000 for three-bedrooms.