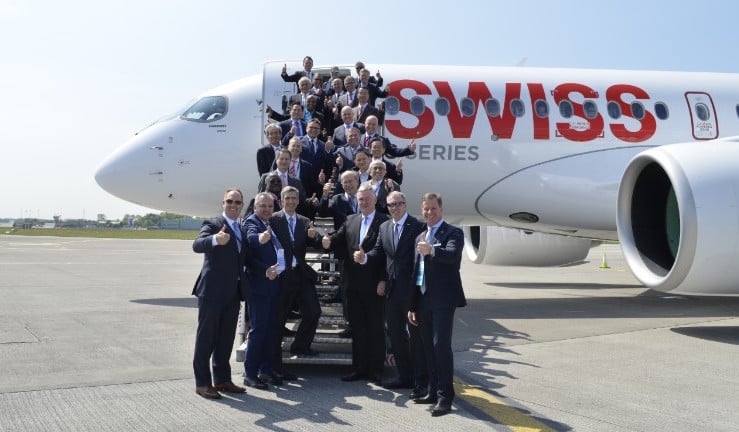 The first Bombardier C Series aircraft, decked in SWISS livery, recently had its first passenger flight ahead of entering service with the European carrier this summer.

The CS100 flew from Dublin to Zurich at the end of the 2016 Annual General Meeting of the International Air Transport Association (IATA) on Friday.

The aircraft, buoyed by lightweight aluminium-lithium and composite materials and powered by Pratt & Whitney PurePower PW1500G engines, has a maximum range of 3,300NM (6,112km).

Passengers have access to 19-inch-wide seats, together with large overhead bins and windows designed to carry a “wide-body feel”.

Airlines have been slow to commit to the CS100, which has been plagued by development delays and slow sales.

Many are still to be convinced about the potential of the 100-passenger market, siding with Boeing and Airbus as they push the single-aisle boundaries with their upgraded B737MAX and A320neo aircraft.

“The CSeries is only alive due to state funding and frankly is not going to survive as long as the A320neo or 737MAX iterations,” said StrategicAero Research chief analyst Saj Ahmad.

But Delta Airlines made a $5.6bn order for 75 CS100s at the end of April and now, with the first taking to the skies, Bombardier executives will be hopeful more carriers will follow SWISS’ lead – particularly from the Star Alliance, whose executives were on board Friday’s flight.

“While Bombardier nabbed a high profile customer in Delta Airlines, this was a loss making deal and is largely wiped out by the 40 units for Republic that will never be delivered,” Ahmad added, suggesting the craft was a “commercial flop”.

“It’s a phyrric win and many potential customers will also want deals like Delta. Not a single customer will want to pay a penny more than what Delta did.”