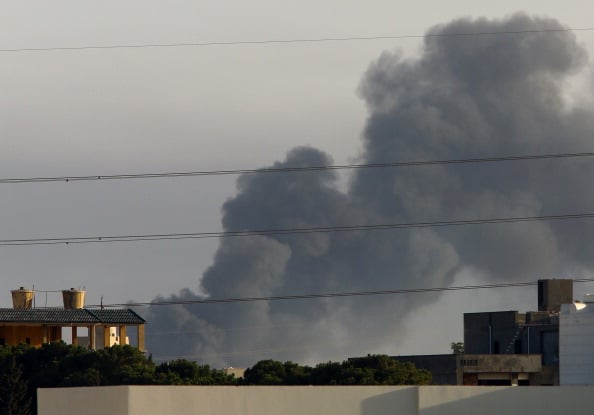 A fire raging for almost a week at Libya’s biggest oil port of Es Sider has destroyed up to 1.8 million barrels of crude and damaged seven storage tanks, causing total damage of $213 million, a top oil official said on Tuesday.

The Es Sider terminal and nearby Ras Lanuf stopped working three weeks ago when forces loyal to a rival government in Tripoli tried seizing them from forces allied to the recognised Prime Minister Abdullah al-Thinni.

The terminals are still under control of Thinni’s forces but the area has become a battlefield against former rebels who helped oust Muammar Gaddafi in 2011 but now fight for control of the North African country.

A huge fire at a tank farm outside the terminal was reported on Thursday after a rocket hit, with both sides blaming the other.

Two tanks have collapsed and two others are still on fire, said Mohamed El Harari, a spokesman for state National Oil Corp (NOC). Two tank fires had been extinguished.

Thinni has been forced to work out of the east since a rival group called Libya Dawn seized Tripoli in August, setting up its own government and parliament that is not recognised by world powers.

Without the two ports, which accounted for around 300,000 bpd of exports, Libya’s total output was in the range of the 380,000 bpd reported on Sunday, Harari said.

The ports of Zawiya and Mellitah in the west of the country have also halted oil exports as the conflict has shut down the connecting fields of El Sharara and El Feel.

Only the ports of Hariga and Brega in the east and two offshore fields are still working but part of the output is needed to feed the 120,000 bpd Zawiya and 20,000 bpd Tobruk refineries.