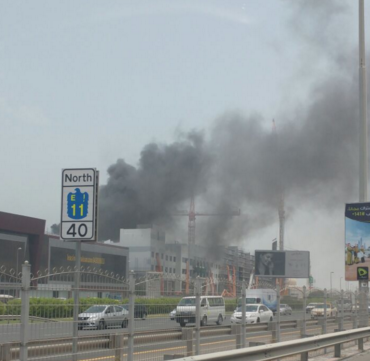 A fire broke out at a Dubai construction site on Monday morning on Sheikh Zayed road near Times Square mall.

The blaze, which broke out on the roof of an under construction building, was first tackled by a group of engineers with a fire extinguisher before Dubai Civil Defence arrived, according to local publication 7Days.

“We ran to the roof with a fire extinguisher to put out the flames until the fire services came,” an engineer at the scene was quoted by the publication as saying.

Another told 7Days that the group pulled the flammable insulated foam from the building’s air condition ducts to prevent the fire from spreading.

A Dubai Civil Defence spokesperson confirmed the blaze, saying the site was safely evacuated and no injuries were reported. Fortunately most were on their afternoon break when the fire broke out.

“It was a small blaze. The call came in at 11.33am on Monday morning, and the fire was put out by 12.14pm,” the spokesman said according to The National. “The fire erupted in the insulation material on the roof of the building.”

I hope everyone is safe. Be careful on the road #fire #dubaifire #dubai #donttextanddrive pic.twitter.com/dFEuKHSoHV

Units from the Al Barsha and UAE Martyrs stations attended the blaze.

The cause of the fire is unknown and is being investigated by Dubai Police and Civil Defence.