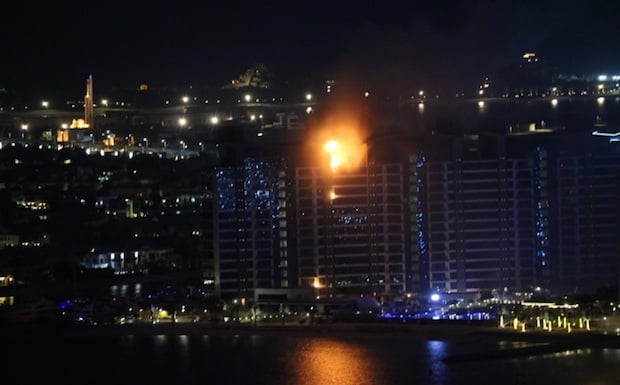 Fire broke out at an upmarket apartment block on the artificial Palm island in Dubai in the United Arab Emirates on Monday but there were no immediate reports of any casualties, the emirate’s media office said.

It was the latest in a series of fires to hit tall buildings, including residential compounds and hotels, in the Gulf’s tourism and business hub over the past two years.

The Dubai Media Office said on its Twitter account that civil defence teams were battling the blaze which broke out at the Oceana, a residential compound on the palm-shaped island.

“The building was safely evacuated and no injuries were reported,” the Dubai Media Office said on its Twitter account.

Dubai Civil Defence confirms that a fire at a building on the Palm is completely extinguished with no injuries reported. pic.twitter.com/cQKlrlJ7F6

In August a fire swept through a 28-storey building under construction in the UAE capital, Abu Dhabi, injuring 13 people, including ten civil defence and other emergency personnel.

Earlier in August, a fire damaged part of a multi-storey building under construction in Dubai and in July another fire broke out in the residential 75-storey Sulafa Tower in Dubai’s upscale Marina District.

On New Year’s Eve, a blaze hit a Dubai hotel and in February 2015 there was a fire at a 79-storey residential tower in the emirate.