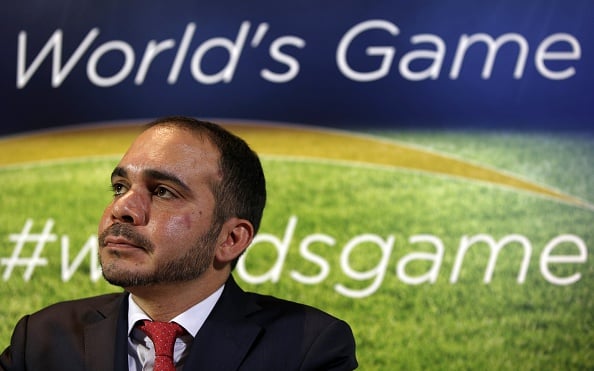 The Jordanian royal is one of three men who will challenge incumbent Sepp Blatter in the election on May 29. The others are former Portugal midfielder Luis Figo and Dutch FA president Michael van Praag.

In his manifesto, entitled ‘A FIFA Worthy of the World’s Game’, Prince Ali pledges to transform the organisation’s reputation and guarantee development.

He also delivered a harsh warning on the future should Swiss Blatter be voted into power for a fifth term, as is expected.

“You cannot underestimate how important it is … to have a change right now,” the FIFA vioe-president told Reuters in an interview on the eve of the Confederation of African Football (CAF) Congress in Cairo.

“It’s been enough, in my opinion, in terms of all the problems and scandals.

“I will not continue on the executive committee if I am not elected because I cannot see another four years for myself if things don’t change. If I win … I’ll make the changes that are so needed,” said the Jordanian FA chief.

“My manifesto is based on my experience as president of a national association and what I have also seen serving on the FIFA executive committee over the last four years. It’s also based on my discussions with other countries.”

Prince Ali said FIFA had to be restored as “a proper service” group.

“We have to bring belief back to an organisation that has had its reputation damaged over the years,” added the 39-year-old.

“The reality is the reputation of FIFA is where it is despite many great people doing their best for football.

“Unfortunately as popular as the sport is, the reputation of its controlling body is in the other direction. You need a change and that change needs to come now.”

Prince Ali said FIFA’s vast profits must be ploughed back into the development of the sport across the globe.

“My ideas are based on the needs and necessities of countries the world over, from those small in size to those at the top of the game, and taking all their perspectives into account,” he added.

His manifesto also put an emphasis on transparency, more consultation and increased effort in tackling match-fixing and racism.