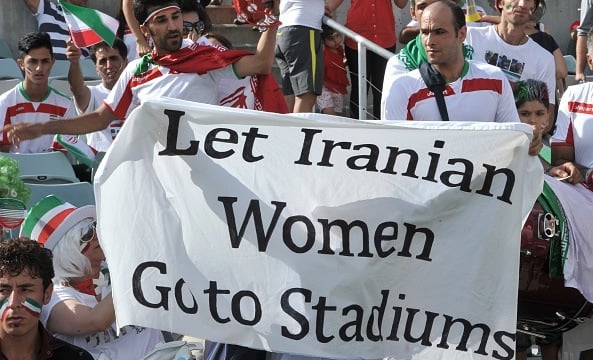 “When I travelled to Iran in November 2013, I was not only confronted with huge popular enthusiasm from football but also a law forbidding women from attending football matches,” he wrote in FIFA’s weekly magazine.

“I raised the topic at my meeting with the President of Iran Hassan Rouhani, and came away with the impression that this intolerable situation could change over the medium term.

“However, nothing has happened. A collective “stadium ban” still applies to women in Iran, despite the existence of a thriving women’s football organisation.

“This cannot continue. Hence, my appeal to the Iranian authorities; open the nation’s football stadiums to women.”

During the Asian Cup in Australia this year, Iran’s support included thousands of women who were free to show up in Australia, without any dress restrictions.

Their female supporters also become a big hit with local media, prompting the Iranian authorities to remind the players to be wary of posing for photographs that may be posted on social media.

Iran is bidding against the United Arab Emirates to host the 2019 Asian Cup and the ban on women is expected to damage their chances of being awarded the tournament.

Blatter also criticised the continental confederations for failing to elect any women onto the FIFA’s executive committee.

The committee includes three women, one with voting rights and two co-opted, but they are elected directly by the FIFA Congress following a change to the statutes in 2011.

“This was hard work because the members of FIFA’s executive committee are elected by the national associations in their (continental) Congresses and…there was never, never a proposal for a woman to be finally in FIFA,” Blatter told an event at FIFA headquarters.

“We had to take the decision, and I did it in 2011 at the end of the Congress, I said we must have at least one woman on the executive committee,” he said.

“In all the confederations, there is no woman…this macho sport, and that’s a pity, we should change in the future.”

FIFA’s Blatter: Only “An Earthquake” Will Stop Qatar From Hosting World Cup