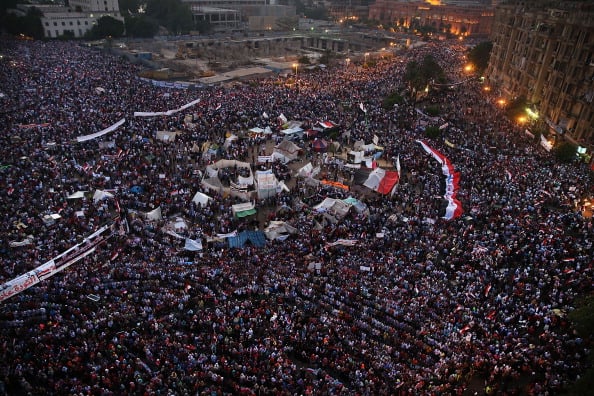 When President Abdel Fattah al-Sisi said people should not moan about Egypt because it was not like war-ravaged Iraq or Syria, his remark gave birth to a joke: New Egyptian passports should read “The Country not like Iraq or Syria.”

Gags like this are in short supply in Egypt.

Humour was one of the only channels for protest under successive Egyptian autocrats accused of mismanagement, repression and corruption. But Sisi’s tightening grip on power is leaving little space for critics, comics or cartoonists.

Thousands of government opponents are languishing in prison, a new law effectively bans protests and poking fun at the government is not remotely funny for the authorities.

“Whoever opposes Sisi is seen as someone who opposes the nation, so the political joke has little place in society and people reject it,” said comedian Mahmoud al-Ghoul.

“Political jokes are not dead but they are frozen.”

At a cafe near Tahrir Square, epicentre of the 2011 revolt that led to the downfall of old leader Hosni Mubarak, a group of comedians discuss the glum state of their business.

Ghoul says that post-2011, he had high hopes that he would one day widely sell his paperback, which takes a critical look at the nature of Egyptian leaders.

But “The President is a Donkey” is a tough sell in modern-day Egypt, where both state-run and private media have rallied behind Sisi and portray his opponents as traitors.

Only a handful of shops are willing to display the book even though it does not name names. Comedians who once saw themselves as agents of change have realised the joke is on them.

By comparison with the current climate, comedians describe the rule of the previous president — Egypt’s first freely-elected leader Mohamed Mursi of the Muslim Brotherhood — as the golden age of humour.

Police and intelligence services that thrived under Mubarak and were opposed to Mursi did not interfere, meaning comic writers found a wide reception for their work in newspapers.

But the laughter did not last and the rise of Sisi, who as army chief toppled Mursi following mass protests against his rule in 2013, coincided with growing fear of economic collapse and the sort of violence that has torn apart Iraq and Syria.

“Now people are scared. They are obsessed with the need for stability,” he said.

Egyptians are famous across the Arab world for their humour. Egyptian comedy movies have cracked up living rooms from Baghdad to Beirut for decades.

Jokes helped Egyptians grapple with poverty, poor sanitation and slums where many families live on top of each other.

But Egyptians rarely poke fun at Sisi, who gazes out inscrutably behind dark glasses from omni-present portraits hanging in offices, shops, homes and lifts across the country.

That might be partly because Sisi has delivered a degree of stability and raised hopes that several mega-projects, such as a second Suez Canal, will deliver jobs and repair the economy.

It is also because no one wants to be branded a traitor, not at a time when the army is battling Islamist militants in the Sinai peninsula, or when the airforce is bombing Libya following the mass beheading of Egyptian laborers by the Islamic State.

“There used to be guys churning out one-liners here,” said a man at the run-down Metropole coffee shop in downtown Cairo as dispassionate customers puffed on water pipes.

“No one is willing to joke anymore.”

The fact that Egypt’s most famous satirist was forced off the air last year when his show was cancelled because of the oppressive political climate sums up the situation neatly.

Despite a massive following at home — including almost four million followers on Twitter — he has decided to move to the United States to become a resident fellow at Harvard’s Institute of Politics at the John F. Kennedy School of Government.

“We are living in the most glorious years of democracy in Egypt, and may the tongue of the person who does not agree with that be cut off,” he said last June after he was yanked off the airwaves, deploying the biting sarcasm he was famous for.

Reflecting the parlous state of freedom of speech in Egypt, the country came in 159th out of 180 countries in the 2014 Reporters Without Borders World Press Freedom index.

Other comics try to fill the void — but on social media such as Twitter or on Facebook, rather than mainstream media, limiting their reach in a country where the Internet is largely the preserve of city elites.

Even that approach is risky.

“Jokes are present on social media. Television shows borrow comedy from social media. The younger generations tell jokes, but the older people don’t like to challenge the leaders because they supported them,” said Anwar.

Aside from the cautious mood among Egyptians, some comedians say they find it hard to get material when it comes to Sisi, who served as chief of military intelligence under Mubarak.

“Sisi rarely makes mistakes that we can jump on,” said comic writer Mohamed Ashour, 32, who like others had a field day under the veteran Mubarak, who was known for blunders.

“Sisi is a cautious military man. He watches every step.”

With new material hard to come across, old jokes are simply being recycled — such as this one from the time of President Gamal Abdel Nasser in the 1960s, which show that the problems of yesterday still resonate today.

Someone sees a man with his nose bandaged and asks him ‘Why is your nose bandaged?’ The man says ‘I had a tooth removed.’ The first man says: ‘Why didn’t you have it removed from your mouth?’ He replies: “Can anyone in this country open his mouth.’