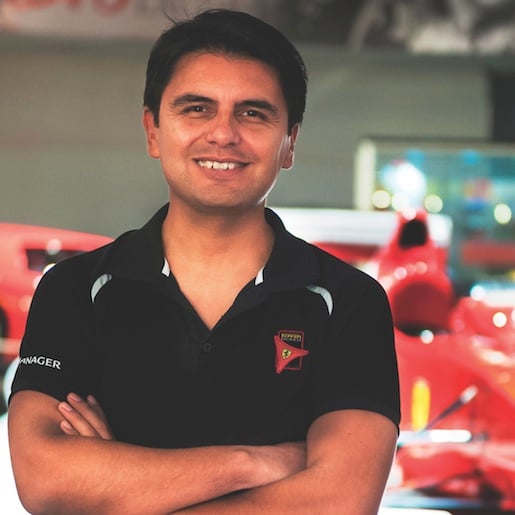 “What is you favorite ride in the park?” I ask Jesse Vargas, the recently appointed general manager of Ferrari World Abu Dhabi, the world’s only theme park branded under the prestigious title of the Italian carmaker.

We are sitting next to Bell Italia, in which children gaily ride a small-scale Ferrari 250 California, circa 1958, across a miniature version of Italy.

“If you would have asked me four years ago, it would be have been Formula Rossa [the world’s fastest roller coaster]. But now that I have a family, it’s the rides that I can enjoy with my daughter who is three and a half – like the Viaggio In Italia, Speed of Magic and Belle Italia,” he says gesturing to the attraction next to us. “I just love seeing the rides through her eyes.”

Ferrari World Abu Dhabi, owned by the Abu Dhabi government and managed and operated by Farah Leisure Parks Management, opened in November 2010. It has seen a steady increase in visitor numbers over the last four years from residents and tourists. But change is coming.

Vargas says that his aim is to satisfy every type of guest who walks into the park, which is the reason behind Ferrari World recently announcing massive expansion plans.

The theme park in Abu Dhabi’s Yas Island will add seven new “iconic” rides, including some that will have an “est” element aka fastest, biggest or the largest, he says.

These new rides are expected to increase the park’s capacity by a minimum of 40 per cent. Three of the existing 20 rides will also be enhanced, confirms Vargas.

But he remains tight-lipped about what’s coming. “The designs that we are looking at cannot be replicated anywhere else. I’m so excited that I may even spill the beans, but I am not going to,” he laughs. “People are going to say ‘wow, only Ferrari World could do something like that’.”

The expansion process has just started and will be completed in three years. The first phase is slated to be ready by the end of this year, and should be operational by 2015.

But the plan is not just to improve and expand the rides, says Vargas. “Apart from investments in the form of rides and amenities, it’s just as important to invest in the soft skills, because that’s the way to deliver a superior guest experience. The idea is to anticipate what guests need at specific points during their visit. That’s how we can set ourselves apart from others.”

Standing out from the crowd is vital at present, with the UAE seeing a boom in leisure destinations. While admitting that rivalry is high, Vargas believes it is smarter for theme parks to join hands and compel tourists to stay longer in the country, so that everyone gets a share of the pie.

“We say, why don’t we all work together to make tourists lengthen their stay here? Rather than fighting with competitors for the one or two days that they [the tourists] are here.”

When it comes to residents, Vargas is confident that there is plenty of time to go around. “We have to be smarter when we target people’s time and say spend it with us – and you won’t be disappointed.”

Having worked for brands such as Sesame Street, Six Flags, Warner Bros and Atlantis in the past, Vargas says Ferrari World Abu Dhabi enjoys a perfect balance.

“It has the need – not the want – to be innovative, cutting edge and unique, and the ability to pull it off and that’s a very unique proposition,” he says. “The park will undoubtedly evolve into the single most exceptional theme park experience in the world.”