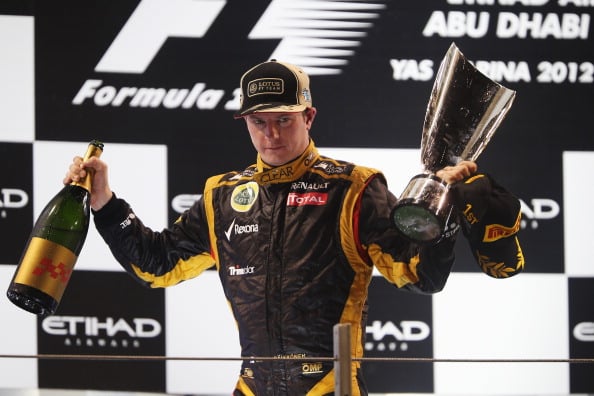 Lotus’s Kimi Raikkonen won a thrilling Abu Dhabi Grand Prix on Sunday becoming the eighth winner of the season, as the race for the world championship heated up.

The Iceman came from fifth on the grid to steal the chequered flag in an incident packed race at the Yas Marina Circuit which saw McLaren’s Lewis Hamilton retire on lap 20 with a mechanical problem, after leading the race from pole.

Ferrari’s Fernando Alonso finished second while Red Bull’s Sebastian Vettel came third after a spectacular drive that saw him start the race from the pit lane.

The two contenders for the world title go to Austin, Texas for the penultimate Grand Prix with just 10 points separating them.

Vettel had been disqualified from qualifying on Saturday after stopping his car on track and failing to extract the required one litre of fuel from the engine.

Red Bull took the decision to start their double world champion from the pit lane, allowing them to make technical changes to the car that would give Vettel greater top speed as he sought to charge through the pack.

The decision paid off and the result would have been a blow to Ferrari who would have expected Alonso to re-gain the lead in the championship battle.

The race was packed with incidents with a first corner collision setting the bar for the remaining 55 laps.

The safety car was deployed after Mercedes’ Nico Rosberg went flying over Narain Karthikeyan’s HRT, after accelerating into the driver’s rear wheel.

While the pack bunched up, Vettel misjudged the speed of Daniel Ricciardo’s Toro Rosso in front of him and had to swerve off the track to avoid a collision, smashing into a marker board and damaging his front wing.

The required pit stop for a new wing worked in Vettel’s advantage as it allowed the team to put on fresh tyres.

When the race restarted with 13 laps remaining Vettel was able to catch Button before passing him for third position and a place on the podium.