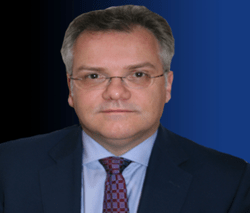 The improving economic outlook in the GCC, coupled with forthcoming regulatory changes intended to make it easier for companies to seek public financing via either partial or full initial public offerings (IPOs), will mean that these companies will need to consider what impact this will have for executive reward in respect of both pay levels and pay structures.

Why the traditional model may not work

The accepted notion of agency theory in the Western economic model means that executive management and shareholders often participate in value sharing arrangements. These seek to align the economic interests of both sets of stakeholders through equity participation in the form of share awards and/or participation in long-term incentive plans.

This model has been less prevalent in the GCC region due to the high proportion of family and state owned businesses; in such an environment, is such an approach valid here? Why should shareholders suffer dilution in order to provide extra reward to executives for simply “doing their jobs,” after all, isn’t that what salary and bonus is meant to reward?

Rewarding for the long-term

Regardless of company reward philosophy, there is the important practical point that new investors will expect the senior management team in place at IPO to remain in their jobs for at least the mid-term and that it is not unreasonable to link an element of their future pay to the long-term success of the company.

This being the case, companies and their remuneration committees will need to be mindful of a range of factors that need to be carefully thought through, notably:

Should rewards be linked to both the preparation for IPO as well as subsequent performance?

Additional workloads and broader spans of responsibility in the run up to an IPO often mean that senior management participate in special or one-off arrangements which can, in many cases, transfer some or all of the accrued value to a new longer-term incentive plan at the point of IPO.

Who should be eligible to participate in an equity plan?

Should all employees have the opportunity to share in some of the potential upside in share price through an all-employee share plan or should participation be limited only to top management? The answer often lies in a company’s broader employee value proposition as well as considerations around share dilution. Given the cultural environment in the GCC where company-wide profit-sharing is common, there are stronger arguments for allowing a wide group of employees to participate rather than focusing only on the top few executives.

How will pay be delivered over the short and longer-term?

Typically the inclusion of additional incentives means higher pay levels for participants but what does this mean for how fixed and variable pay is set and delivered over both annual and longer-term performance cycles? What weight should be attached to long-term pay given the region’s traditional focus on annual or short-term performance? Companies implementing long-term plans for the first time may be more comfortable delivering a lower proportion of total pay in this way, whilst the 20 per cent of companies already operating such plans in the region may deliver a higher proportion of total pay via long-term plans.

What form of vehicle should be used?

Depending upon the desired purpose of the plan different forms of equity vehicle should be considered. A simple restricted share for example is simple to communicate and value. Share options on the other hand are a leveraged vehicle that only deliver value to recipients if the future share price is higher than when the awards were made. Figure 1 illustrates this concept – a restricted share growing at 5 per cent per annum over 10 years would deliver the same value as an option growing at just over 10 per cent per annum over the same period. Consequently restricted shares can be an effective form of retention award whilst an option focuses on share price growth and therefore carries a different risk/reward profile. It may well be, for example, that some form of combination of equity vehicle is more appropriate for top management, whilst restricted shares may be more appropriate for top talent or high potential employees elsewhere in the company where the focus is more on retaining key skills and experience. 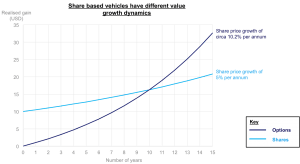 Should awards have additional performance conditions or tests applied?

Should real or phantom equity be used?

Shareholders in the region are naturally reluctant to offer real shares to management since it presents issues over dilution and equity markets are often illiquid. Additionally, unlike in many Western economies there are no obvious tax benefits in making awards in shares rather than cash. However, if shareholders wish to reinforce the alignment principle then it will be important that management share the same economic experience of shareholders be that positive or negative.

As the GCC markets mature new external shareholders will come to expect that management receive some portion of their total pay in the form of some form of equity. For the present phantom or shadow equity paid in cash but which mirror actual share price performance may be the simplest answer.

At Hay Group we believe it is vital that companies align pay, performance and shareholder value creation. At the same time, new shareholders will rightly be concerned that the top management team and key talent remain in place to help shape and grow the company.

Companies that take the time to carefully consider these issues are more likely to arrive at a set of remuneration arrangements that are cost effective as well as acting as both a retention and incentive vehicle to help support the business in its first critical phase of public ownership and investor scrutiny.