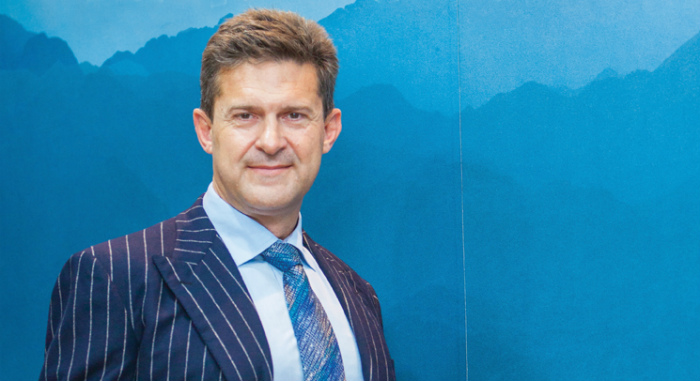 In the bottled water industry, it helps to have a fluid and adaptable business strategy.

Especially when a sudden government ban threatens your company’s livelihood. Spurred by the need for water security, the UAE Ministry Of Environment and Water issued a decree banning the export of bottled water produced from groound sources in the coutnry in 2012.

As the only manufacturer to produce pure natural spring water in the UAE, Masafi was always likely to be the heaviest hit, and had only months to put its affairs in order.

“That came into effect in August, which put a lot of pressure on us because almost 30 per cent of our revenue and volume comes from exports,” says CEO Reginald Randall.

Indeed, Masafi had been exporting to more than 50 countries from the UAE prior to the ban.

“So what we had to do is find an alternative source to produce water outside the UAE.”

Being a local water producer was not without its challenges, even before the ban competeing against global heavyweights Danone, nESTLE, PepsiCo and Coca-Cola.

“The advantages that the big nationals have is that they piggy back on their carbonated soft drink (CSD) brands so they tend to use their power there to get the water in, ” says Randall, speaking from his experience working at companies including Coca-Cola. “They sue it as more of a loss leader to sell more of their soft drinks into the market.”

In comparison, Masafi’s position as a local natural mineral water producer is its advantage, he says.

That’s how we are positioned differently to them but it does preclude us from some semi-exclusive channels like the hotels and restaurants. if they’ve got one of the big guys delivering CSDs to them, they will normally just be forced op take their water.”

Masafi was the UAE’s first bottled water producer, established in 1976 with a paid-up-capital of approximately $5.5 million.

When the company first started its operations from the village on the edge of the Hajar Mountains that bears its name, water containers mroe closely resembled white milk bottles than the clear plastic shapes seen today.

Since then the company has expanded beyond its traditional bottled water market with a number of different product lines.

This, unexpectedly for brands in its field, includes tissues, which were originally tied to the company’s bottled water as part of a promotion. When it ended, consumer demand led Masafi to sell them as a separate product.

“Both water and tissues are about somthing that touches your body whether it is internally or externally. A natural image, quality and zero chemicals- all of these attributes are ocommon to both although they are totally different categories.” say Randall.

Juices followed in 2004 and 2005, and then flavoured waters, before another unexpected turn saw Masafi venture into rice products.

“over the years, the strategy of the company has been to branch out and be not only a water company and hence the lanuch of tissues and juices. We were once a distributor for one of the big rice companies, and when that distribution contract ended. We decided to go into rice as well.”

But not every product venture has been successful.

An attempt to break into the nsalck food business with oven baked chips proved less ofa  hit with consumers.

“The demand and throughput was not there and all of the focus groups were saying ‘why are you guys doing this?’ It is not something they expected from Masafi.

As a result, the company took the decision to discontinue the line at the beginning of 2013.

Faced with an imminent ban on its exports, Masafi needed to come up with a plan quickly, especially given the decree would not be affecting its rival.

“They don’t use a natural water source so they are still able to export,” says Randall.

The company therefore considered its options.

“One of our considerations was to just set up a factory in Dubai using desalinated water,” he reveals.

But this did not fit with the company’s brand equity or its natural spring water origins.

Where then could Masafi find the water source it needed?

“Our biggest market is Oman after the UAE, so that was the first place to start.”

The company also enjoyed market leader status in its GCC neighbor, and given Oman’s position on the same mountain range as Masafi’s UAE facility it seemed like an obvious choice.

After a lengthy process, the company eventually found a site in Oman with an existing plant, and nearby water sources, and went about installing new machinery.

Investment in the new facility reportedly totals over Dhs20 million.

“We took a long time to find it but we’ve got it and it started running in February,” he says.

The company has also established a partnership in Turkey to fulfill its other export needs with spring water plant.

“The Oman site, will serve Oman predominantly, and Turkey will be the one for serving other con tries,” says Randall.

This change has not been without its costs, however, with Masafi’s previous export port, Dubai, offering significantly cheaper, shipping than other locations.

“We were quite spoilt from Dubai, offering significantly cheaper shipping than other locations.

“We were quite spoilt from Dubai in that the shipping cost is in some cases less than 20 per cent of what it is from other countries like Turkey,” says Randall.

TURNING THE TAP BACK ON

Standing on firmer ground, Masafi is now turning its sights to new products. These include more traditional addition like its Go Bottle, designed for sports drinkers, and an expanded juice flavour range, as well as completely new product lines.

“There are  a lot of categories that the Masafi brand could go into and it’s a brand that holds a lot of similar equity to a company like Nestle for instance. There is no reason we couldn’t branch out to some of the categories they are in.”

While Randall is tight lipped as to what these could be, he reveals Masafi is currently undertaking mapping exercises and gives examples of related hygiene products, including wet wipes with mineral water, kitchen roll and handkerchiefs.

“Outside of that there is a whole range of personal care items we could get into,” he adds.

Masafi has also not turned its back on the UAE having recently finished commissioning a 36,000 bottle per hour line in it factory, increasing capacity while reducing wast and electricity use.

“That line was really commissioned as a green footprint type saving. It’s enabled us to save between 60 and 100 tonnes of polyethylene terephthalate (PET) resin usage per hour,” says Randall.

For now, Masafi will continue to focus on the GCC, he explains, and is busy setting up distribution and sales channels in Kuwait and SAudi Arabia, with Qatar to follow in the near future.

But with increasing shipping costs, Masafi’s production strategy is now turning to a more localised approach for distribution.

“That is a big challenge for us to overcome now, not shipping from the UAE. How do we reduce and eliminate that shipping cost option? The no-brainer is to get production done closer to your major markets.”

Masafi, it seems, is not done searching for new water sources in the region quite yet.