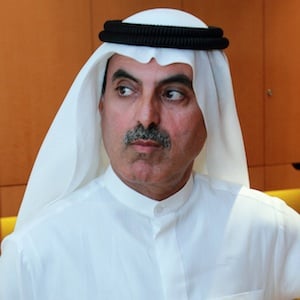 A small rickety lift spills into an inconspicuous teak-panelled office. Here, on the sixth floor in the heart of old Deira, a banking empire was born.

The sparsely furnished surroundings belie the $20.94 billion fortune that Mashreq bank is working to boost and recapitalise after the torrent of the economic crisis. HE Abdul Aziz Al Ghurair, the man behind the UAE’s first ATMs and CEO of the country’s largest privately owned bank, sits bolt upright at the head of the table – a formidable presence, swathed in white.

But behind the humour, his fixing gaze reveals a man with a long-wrought vision – first it was to carve a consumer banking industry in the UAE as far back as the 1970s; today, it’s about survival and clawing back Mashreq’s value after the wringing of the recession.

As chairman of the Emirates Banks Association (EBA) and the UAE’s richest man according to Forbes with a family fortune of $2.9 billion, plain-speaking Al Ghurair seems bent on assuaging the wrongs of the past and instilling a sense of prudence into banks – all without crushing the country’s economy.

“Five or six years ago banks were growing at 25 per cent per annum, that’s huge. And when banks looked at their peers increasing their income ten fold, they would also feel like they should increase ten fold,” he says of a pre-crisis banking version of keeping up with the Jones. “One thing [we have learned] is that the cashflow should come from the projects being financed; we eased on this and took refinancing options – plenty of that happened,” he says, looking down.

The UAE banking sector has universally accepted self-checked prudence after having learned a hard, multi-billion dollar lesson. However, the industry is also contending with increasingly iron-fisted regulations from the country’s central bank.

Al Ghurair, who recently accepted a post as chairman of the Dubai International Financial Centre Authority (DIFCA), also says the banking regulations are a necessary move: “Some regulation is good, zero regulation is a disaster – but regulation will also put the brakes on bank profitability.”

Specifically he talks of restrictions in lending to UAE nationals and reduced charges for retail customers, which will hamper growth in the near-term.
There is a fine balance between carving a sustainable banking sector and throttling growth, he warns.

In his role as chairman of the Emirates Banks Association, he guides meetings with the main UAE banks and the government to “create a dialogue on almost a monthly basis” between stakeholders.

“The current regulations are very strict and almost pro-customer, but we have to look at it holistically. We have to expect the central bank to talk to the banks and really understand what it takes to give our service. We need them to know how much it costs us and show them that we are not just trying to get extra money but we are recovering the cost of the service,” he says.

After three years, non-performing loan (NPL) levels are continuing to dash UAE banking profits, however Al Ghurair says that provisioning levels should reduce this year unless there is an “overnight surprise.”

But there are other spectres on the horizon. The UAE’s economic growth is expected to slow to 2.3 per cent this year from an estimated 4.9 per cent in 2011, said the IMF in April. The body has not yet released the official figures for 2011.

Al Ghurair is circumspect. “I think the worst is behind us; we are on the path to recovery. For every one per cent of GDP growth it should reflect as 1.75 per cent growth in banks’ overall profitability. The UAE economy is stabilised; it is going to recover,” he says.

“Even if the economy grows at three per cent, then the banking sector should grow at around five per cent. We are benchmarked against that time before 2008, those glorious three years, but we should forget that. We won’t have that back in the near future,” he says.

“[Activity] has increased but it hasn’t come back to what it used to be. In the last three years there has been no major government activities; generally banks were repaying their loans so banks had no chance to do business or stopped the mega-sized projects,” he adds.

“Because of the new guidelines on retail services I see very little growth on the retail side unless the population increases. But the bulk of the growth will come in from the corporate side; there is more to come from the government and more to come from the infrastructure side. With the Arab Spring, the UAE has redefined itself as the hub, the place where business can be done.”

The UAE central banking restrictions and uncertain GDP growth come amid a backdrop of continued chaos in the Eurozone as the world prepares for a ‘Grexit’. But Al Ghurair says this is the least of his problems.

“[It won’t really affect us] but there is a psychological and emotional effect to things that happen in the rest of the world. I can never understand why people behave that way but they do. People in a bad economy are looking for excuses. The markets seem to accept this kind of justification, but people exaggerate both the optimistic and pessimistic news. Look at Facebook,” he says, taking a swipe at the social network’s disastrous but much-hyped IPO.

Amid an increasingly opaque landscape, Al Ghurair maintains that UAE banks can continue to survive and grow mainly by focusing on customer service and conservatism. By his own admission the country has a long way to go to provide an adequate service to an increasingly irate band of customers.

“For banks to grow they must improve service. In the past, when we were growing at 25 per cent, the attention was on growth. Even the customer tolerated bad service then – they didn’t mind, they said ‘I’ll make half a million dirhams out of this deal, it’s great.’

Mashreq has even introduced a service where it’s possible to open an account and get a debit card with PIN in just 30 minutes at some of its branches.

“Our goal is to delight the customer on the surface. It has to be noticeable. We will not settle until we become number one in service. Because we are a huge bank, if we have a complaint it could take time to filter through, so we have decided that 85 per cent of issues should be resolved right there and then by the customer service officer or branch officer on the spot.”

“We will now say everybody should be in power, and this means there will be a lot of changes in authority and training. Improving service is not a quick fix – it is very difficult, painstaking and continuous. Products are easier. Good luck to anyone who thinks they can fix customer service overnight.”

Al Ghurair’s caution, in addition to some relief from NPLs, has led to a slow recovery for the bank, which saw its assets clipped to reach $20.94 billion (Dhs77 billion) in 2011, down 9.34 per cent on the year before. Mashreq, along with other banks in Dubai, has also suffered from heavy exposure to Dubai World and Dubai Holding debts.

Profits for the first quarter of this year grew two per cent year on year to reach Dhs271 million. But the figures have yet to impact on the firm’s share price which was Dhs67 at the time of press, compared to a high of around Dhs242 in June 2008 – a familiar story for the bulk of Dubai’s listed firms.

If there is to be a revolution in UAE banking, you can be sure Al Ghurair will be behind it, as he was with the introduction of consumer-focused credit cards, Dubai’s first ATMs and the Mashreq Millionaire programme. It’s clear with his many roles, as Mashreq CEO, and boss of the DIFCA, the EBA and the GCC Chapter of the Family Business Group, the driven billionaire has more than enough tools at his disposal.

What does it take be like Al Ghurair? Really, how does this man get so much done?

“I think ambition is key. If you don’t have ambition you won’t succeed. To my surprise, people don’t aim for the sky. You should also have vision and a mission – that’s what a leader is for. But you must be able to roll up your sleeves and get into the nitty gritty detail,” he says.

“A leader should be able to show the way. You might have a vision but do you know how to communicate it? You need to engage all your stakeholders and you’ll be surprised what they come up with. I think you should have a big heart – some people do make mistakes.”

He turns to our photographer again: “You want to become rich? Then you need to start photographing models, and not me,” he laughs.

No, but seriously, how do you get rich? “Some risk taking is a must. But you need to judge whether it’s a risk worth taking or if it will be an absolute disaster.”

And that, too, is the fine balance that defines Al Ghurair as he sets about evolving the UAE’s banking sector.