There has been a rapid growth of AC Milan’s off-the-pitch activities. What are some of the major highlights?
AC Milan aims to involve the over 500 million Rossoneri fans across the globe and create new opportunities of value for business partners. Over the past couple of years, we have been able to sign 25 new partners, including Expo 2020 Dubai, Jeeny and SIRO in the Middle Eastern region, which allow us to be closer to our fanbase of over 35 million people in the MENA region. In the past couple of years, we have also been proud to renew our agreements with some of our partners, including Emirates in 2020, extending our long-standing partnership to 17 years. Meanwhile, market research firm YouGov found that AC Milan is the best-regarded Italian football club in the US and China, and is the strongest team in Serie A in terms of brand presence in Italy.

Emirates, one of the world’s biggest airlines, is your shirt sponsor. What does that partnership bring to AC Milan and vice versa?
Emirates has been by our side since 2007, our longest-standing partnership within our current roster of partners. In the 2010-11 season, Emirates took its place on the front of the club’s shirt, bringing the brand to prominence among Rossoneri football fans. AC Milan provides a platform to communicate Emirates’ brand around the world. In Emirates, AC Milan has an ambitious partner who are representative of the connected and international nature of our global fan base.

What is the purpose of your visit to Expo 2020 Dubai?
As part of this trip, we are working together to host an important event in line with the Expo theme ‘Connecting minds, creating the future.’ Our CEO Ivan Gazidis is at the Expo and will on Thursday, February 3 at 3pm, take to the stage at NEXUS Hub at the Expo to speak on the topic of the future of football, its role in society and the importance of a new generation of sustainable stadiums. He will share the stage with Christopher Lee, managing director of Populous, the architectural firm responsible for the design of the new Milan stadium and Ahmed Al Khatib, chief development and delivery officer of Expo 2020, to explore the fundamental role of sustainable architecture in the future of football and modern cities. 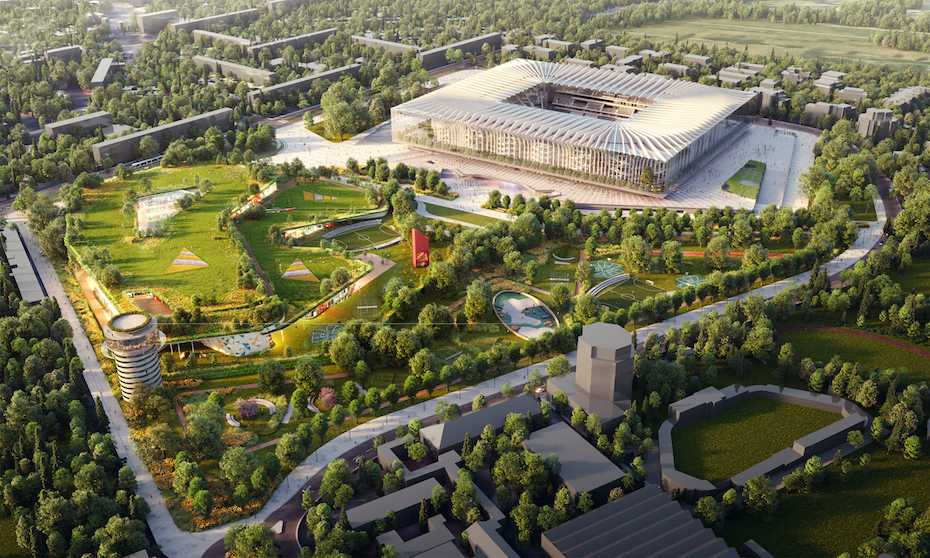 What will the upcoming stadium in Milan mean for the local community and football fans visiting it?
This is a project that represents more than EUR1bn of private investment, which will serve as a job generator and will be key for the future development of the club, the city of Milan and Italian football in general. The new stadium will be ground-breaking in terms of innovation and sustainability. It will be surrounded by a large green area and it will be the most sustainable football stadium in Europe, carbon neutral and LEED-certified, thanks to the use of the most innovative materials and cutting-edge technologies in terms of water and electricity usage, as well as noise control. The next phase of the project will be carried out in the next months with the aim to present a final project at a later stage in 2022.

What is the interest in Italian club football that you’ve seen from the Middle East region, especially from the GCC countries?
We have a strong relationship with our fans throughout the Middle East, but specifically Dubai given the strength of our long-term relationship with Emirates. Football is the number 1 sport here and you can see the passion in the region – across all key metrics, TV audiences, and social metrics – all of which point towards growth. Following almost two years of Covid disruption, our partnership with Expo 2020 Dubai has offered us the chance to build a presence in market once again – we held a fan viewing event at Expo in Autumn 2021 and have an AC Milan Academy present at the event that has seen over 650 girls and boys receive one-to-one coaching from a Milan coach. These are small steps but alongside Expo and our partners, we are certain that these initiatives give us a great platform to build on and we hope to be able to bring our men’s and women’s teams out here in the coming years.

What have been some of the digital transformation initiatives implemented at AC Milan?
In the last year alone, AC Milan has become the most-followed Italian football club on Twitch, the second Italian Club for number of likes on Tik Tok and has reached 1 million subscribers on YouTube, thanks to the highest growth in subscribers recorded in the current season among all the Serie A clubs. In addition, the club launched the new The Studios: Milan Media House – an innovative hub for the production and sharing of media content, which gives us an opportunity to be active players in the entertainment sector.

What are some of AC Milan’s off-the-pitch expansion plans?
We have invested in our Studios, and we are building our in-house content capabilities while looking to move further into the adjacent spaces of fashion, entertainment and esports. Over the past 12 months, we have launched new collections with PUMA, executed media activations around the Ghostbuster’s remake and invested in our partnership with QLASH Esports. When it comes to entertainment, we also have an exciting partnership with leading entertainment company Roc Nation in place, which represented the first real cross-over between a football club and an entertainment company. With Roc Nation, we were able to deliver two live shows, From Milan with Love and From Milan with Love: Next Gen, which were designed to thank all the frontline workers during the first Covid-19 lockdown. The events were truly a success and saw the participation of music stars, including Alicia Keys. Whilst we are investing in the digital transformation and have the ambition to collaborate with brands outside of the pure football space, it is imperative that the Club also looks after its existing global fanbase. In that direction, and with Emirates’ support, we hosted a fan viewing at Expo 2020 Dubai last November, “From Milan to Many: Dubai Watch Party”, which gave local fans the opportunity to watch an AC Milan game alongside Rossoneri legend Daniele Massaro. The event was a success with over 200 local fans in attendance. We then replicated the event at Jay-Z’s exclusive 40/40 Club in New York City for the Milan Derby, with over 300 fans in attendance. All of these examples show how the AC Milan brand is able to move authentically into new spaces to innovate and build relevance beyond football.