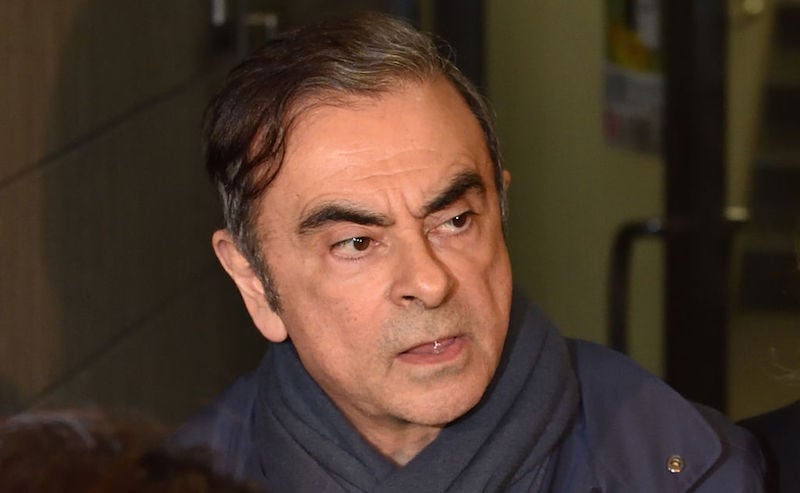 Carlos Ghosn, the fallen automotive titan facing trial in Japan for financial crimes, fled the country for Lebanon, marking a stunning twist in a saga that began with his shock arrest in Tokyo just over a year ago.

“I am now in Lebanon and will no longer be held hostage by a rigged Japanese justice system where guilt is presumed, discrimination is rampant, and basic human rights are denied,” the former head of Nissan Motor Co. and Renault SA said in an e-mailed statement Tuesday. “I have not fled justice – I have escaped injustice and political persecution.”

Ghosn’s escape to Lebanon, where he has citizenship, puts him in a country with no extradition agreement with Japan. The 65-year-old has said he’s the victim of a conspiracy between Nissan executives, prosecutors and government officials to prevent him from further integrating the company with Renault.

He was awaiting trial for what prosecutors and his former colleagues at Nissan called a pervasive pattern of financial misconduct and raiding of corporate resources for personal gain — allegations that Ghosn has denied. Ghosn fled Japan because he doesn’t believe he will get a fair trial in the country, a person familiar with the matter said earlier.

Neither Ghosn’s daughter nor his attorney in Japan responded to calls seeking comment. No one answered the phone at the Tokyo Prosecutor’s Office, the Tokyo District Court and the Immigration Bureau of Japan, and nobody was available to comment at the office of Prime Minister Shinzo Abe. Japan is on public holiday from Tuesday through the end of the week.

Ghosn, a globetrotter who for years was a regular at events frequented by the rich and famous — including the World Economic Forum in Davos, Switzerland — was released on bail in April under the condition that he live at a registered address and not leave Japan.

The strict terms of his release were designed to prevent him from absconding. He wasn’t permitted to spend more than one night away from his house without a judge’s permission. A video camera was trained on his front door, and at the end of each month, Ghosn was required to provide a list of everyone he’d met.

Around town, the former executive was tailed by unmarked sedans. At parks or restaurants, men would get out of the cars and follow him on foot. Ghosn’s overseas travel ban was still in place when he fled to Lebanon, according to Kyodo.

History shows beating a criminal charge in Japan is almost impossible. Courts there have a nearly 100 per cent conviction rate as Japanese prosecutors have a range of procedural advantages unavailable to Western counterparts. In many cases, the prosecution can introduce evidence obtained without a proper warrant.

Japanese prosecutors and the U.S. Securities and Exchange Commission both claim he and Nissan violated pay-disclosure rules by being compensated $140m more than the company reported to shareholders.

Ghosn also faces breach-of-trust charges related to transactions that transferred personal investment losses to Nissan, and that moved money from a dealership in Oman into a company he controls in Lebanon.

It’s not clear how Ghosn left Japan since his passport was confiscated as part of the conditions of bail. According to Lebanese media, he arrived on a private jet from Turkey. Neither is it clear how Japan might get Ghosn back: The country has extradition treaties with the US and South Korea, according to the foreign ministry’s website.

Ghosn’s allies have long feared he would be unable to get a fair trial in Japan. His wife Carole told Bloomberg Television last month that he should face trial in France, describing Japan’s “hostage justice system” as one that considers those who are charged “guilty until proven innocent.”

Ghosn was born in Brazil and raised in Lebanon, where he has investments in real estate and vineyards and continues to be viewed as a business icon and wunderkind. His image has been used for national postal stamps.

Since the early days of his incarceration, Ghosn won support from Lebanon.

Lebanon’s ambassador to Japan bought a mattress for Ghosn in December 2018 and pushed to have him moved from solitary confinement. Hady Hachem, the chief of cabinet of the minister of foreign affairs, said at the time that the government was also demanding the Lebanese citizen be allowed to contact his family and was making sure he had proper legal representation.

Ghosn’s escape leaves another ex-Nissan board member, Greg Kelly, still facing trial in Japan. “We are studying the implications and don’t believe Mr. Kelly should have been indicted to begin with,” said James Wareham, a Washington-based attorney for Kelly.

Kelly was taken into custody at almost the same time as Ghosn, indicted for allegedly helping the car titan under-report his compensation, and then freed on bail in December 2018. Kelly has denied breaking the law.