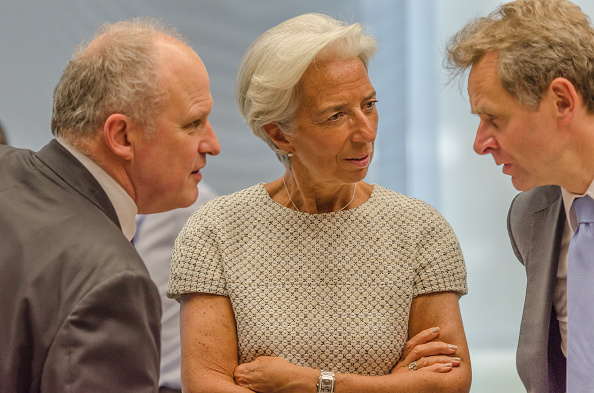 Eurozone leaders will fight to the finish to keep near-bankrupt Greece in the eurozone on Sunday after the European Union’s chairman cancelled a planned summit of all 28 EU leaders that would have been needed in case of a “Grexit”.

In return, leftist Prime Minister Alexis Tsipras will be required to enact key legislation in parliament on Monday to start restoring the broken trust of his partners in the 19-nation currency union to win a third bailout, ministers said.

European Council President Donald Tusk announced that he had called off the tentatively planned meeting of EU heads of state and government, saying the eurozone summit to start at 4 p.m. (1400 GMT) would “last until we conclude talks on Greece”.

Eurogroup finance ministers resumed on Sunday a meeting suspended after nine hours of acrimonious debate on Greece’s application for another three-year loan on the basis of reform proposals Tsipras accepted after long resisting.

Several hardline countries voiced support for a German government paper that recommended Greece take a five-year “time-out” from the eurozone unless it accepted and implemented swiftly much tougher conditions, notably by locking state assets to be privatised in an independent trust to pay down debt.

Argument became so heated that Eurogroup chairman Jeroen Dijsselbloem decided to adjourn at midnight and resume talks at 11 a.m. to allow tempers to cool.

“The main obstacle to moving forward is a lack of trust,” Italian Economy Minister Pier Carlo Padoan told reporters. “I would like to see the Greek government take concrete actions starting tomorrow in parliament to implement measures that are needed for Greece in the first place.”

European Commission Vice-President Valdis Dombrovskis, who is in charge of the euro in the EU executive, doused Greek hopes of an immediate agreement on Sunday to start loan negotiations.

“It’s utterly unlikely the European Commission will get a mandate to start formal negotiations as regards a third programme or ESM programme today,” he said, referring to the European Stability Mechanism bailout fund.

A draft statement by the Eurogroup discussed late on Saturday and seen by Reuters listed a series of additional commitments Greece would have to make just to start loan talks.

“The package needs to be significantly strengthened and broadened in order to provide for appropriate conditionality for a possible three-year ESM programme,” the document said.

Greece’s new finance minister, Euclid Tsakalotos, kept silent in public but the reaction among lawmakers of Tsipras’ radical leftist Syriza party, still smarting from having to swallow austerity measures they had opposed, was furious.

“What is at play here is an attempt to humiliate Greece and Greeks, or to overthrow the Tsipras government,” Dimitrios Papadimoulis, a Syriza member of the European Parliament, told Mega TV.

With banks shuttered for the last two weeks, cash withdrawals rationed and the economy on the edge of an abyss, some Greeks in the streets of Athens vented their anger on German Chancellor Angela Merkel and Finance Minister Wolfgang Schaeuble.

“The only thing that I care about is not being humiliated by Schaeuble and the rest of them,” said Panagiotis Trikokglou, a 44-year-old private sector worker.

Greece has already had two bailouts worth 240bn euros from eurozone countries and the International Monetary Fund, but its economy has shrunk by a quarter since the crisis began, unemployment has soared above 25 per cent and one in two young people is out of work.

Athens defaulted on an IMF loan repayment last month and faces state bankruptcy if it cannot make a bond redemption to the European Central Bank on July 20, which would likely force the ECB to cut emergency funding for Greek banks.

Merkel is under mounting pressure from her own conservatives not to give any more money to Greece, but she has so far said she wants to hold the eurozone together, and that will require a third programme for Athens.

She requires the assent of the German parliament to agree to the opening of loan negotiations, so diplomats expect her to commit to calling a special session of the Bundstag to give her that mandate if Greece enacts prior reforms this week

The United States has added its voice to calls for a deal this weekend, concerned at the geopolitical consequences if Greece were to be cut loose and become a failed state in the fragile southern Balkans, adjoining the Middle East.

“No one wants to see a North Korea in southeastern Europe,” a European Commission official said.

European Economics Commissioner Pierre Moscovici, who along with the French government has pressed for a deal to keep Greece in the zone, stressed that the three institutions representing the creditors – the Commission, the IMF and the ECB – agreed there was a basis for loan talks.