Just as European investors thought the outlook for the region’s equities couldn’t get much bleaker, the euro has declined to reach parity with the dollar for the first time in two decades. This means the two currencies are worth the same.

The single currency extended declines to trade at par with the dollar on Wednesday with the greenback strengthening on the back of hotter-than-expected US inflation data. The Stoxx 600 Index fell as much as 1.9 per cent before trading 1.6 per cent lower by 1:52 pm in London.

While a weaker euro should technically be good news for export-oriented companies, the plunge adds to headwinds for European stock investors already grappling with slowing economic growth, soaring inflation and a spiraling energy crisis. The benchmark Stoxx Europe 600 Index just wrapped up its worst first-half plunge since 2008 and strategists have warned of more declines ahead. 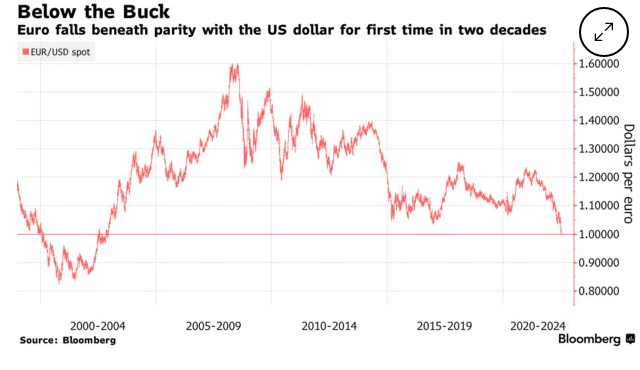 The 12 per cent decline is the result of multiple pressures, from the  situation in Ukraine to an energy and fuel crisis. Add in central banks moving at vastly different speeds and an in-demand dollar, and some analysts say parity may not be the end point, but merely a stepping stone to further weakness.

“The majority of European exporters are cyclical, which are still likely to struggle with recessionary headwinds,” said Marija Veitmane, senior strategist at State Street Global Markets. “Within defensives, it is pharmaceuticals that have the highest proportion of foreign sales, so that could be a good way to play currency weakness.”

Bank stocks are likely to see a big impact, since the common currency is a barometer of the state of the euro zone economy, while a weaker euro amid recession fears may dim the chances of higher interest rates lenders need to boost their margins.

The sustained decline in the euro has already hurt shares of companies focused on the euro zone more than those who have a higher dollar exposure. A Goldman Sachs basket of European shares with high dollar exposure has fallen about 9 per cent this year, strongly outperforming a domestic-basket equivalent, which is down nearly 17 per cent.

Gold holds decline as dollar reigns amid concerns over slowdown