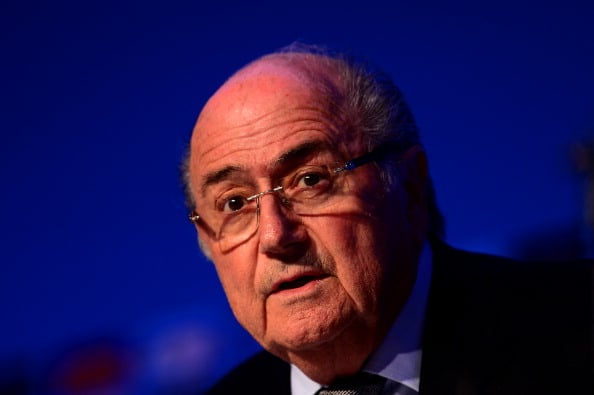 The Swiss-born FIFA chief complained on Sunday he had been shown “zero respect” in recent days, revealing how he had rejected advice from one of his main critics, the head of the European governing body, to quit at last week’s FIFA congress.

John Whittingdale, the British government minister with overall responsibility for sport, renewed calls for Blatter to step aside on Sunday, saying all options should be considered when it came to pressuring him to resign, including boycotting the World Cup – something that could split the sport and be calamitous for the tournament.

Blatter, 79, won a vote on Friday to serve a fifth term as FIFA president even though the U.S. Department of Justice has charged nine soccer officials with corruption and Swiss authorities are conducting their own criminal investigation.

He has played down the impact of the scandal on one of the world’s most powerful sports bodies, which takes in billions of dollars in revenue from TV marketing rights and sponsorships.

Blatter is not accused of any wrongdoing personally and has implied that the United States timed news of the charges to try to scupper his re-election.

Asked how he had coped with the criticism in the past few days, he told the Swiss newspaper Sonntagsblick: “Let me put it this way: I’ve been shown zero respect.”

Blatter’s future could yet depend on the reaction of FIFA’s major sponsors and stakeholders such as Coca-Cola and McDonald’s, who have been dismayed by the arrests and U.S. prosecutors announcing indictments of officials and companies.

Britain’s Sunday Times newspaper reported Swiss prosecutors would question Blatter, who has led FIFA for nearly 20 years, as part of a criminal investigation into votes to award the 2018 and 2022 World Cups to Russia and Qatar respectively.

A spokesman for Switzerland’s attorney general dismissed the possibility of immediately calling in Blatter as “nonsense”.

“The president of FIFA will not be questioned at this point in time,” the spokesman told Reuters. However, he added: “If need be, he will be questioned in the future.”

The Sunday Times reported Blatter would be the last of 10 FIFA officials to be questioned. Michel Platini, the president of the European governing body UEFA, and Vitaly Mutko, the Russian sports minister, would also be interviewed, it said.

In the Swiss newspaper interview, Blatter described a meeting he had on Thursday with Platini, when the former French international star encouraged him to quit honourably.

“He said in all seriousness: ‘Sepp, hold the congress and at the end say you’re stepping down. You’ll have a gigantic party thrown for you, and you can keep your office here at FIFA’,” Blatter said, adding that he had refused Platini’s invitation to have the conversation over a glass of whiskey.

Blatter comfortably won the FIFA vote with strong support from developing nations, which have received generous funding from FIFA to develop the sport under Blatter’s leadership.

Britain – which has been one of Blatter’s fiercest critics, especially since England lost a bid to host the 2018 World Cup – stepped up the pressure on Sunday.

“Last week, some of the game’s most respected figures raised the prospect of world football turning its back on FIFA,” Whittingdale, who is Britain’s Secretary of State for Culture Media and Sport, wrote in the Sunday Times.

“Michel Platini has talked of European nations boycotting future World Cups if Blatter refuses to stand down. No options should be ruled out,” he said.

Prime Minister David Cameron and Greg Dyke, the chairman of England’s Football Association, have urged Blatter to quit. Prince William, who lobbied for Britain to host the 2018 tournament along with star player David Beckham, has also spoken of the need for FIFA to reform.

FIFA had long been a “byword” for fraud, sleaze and corruption, Whittingdale said, accusing Blatter of treating soccer with contempt and of losing “the few shreds of credibility he had left”.

“Now, thanks to the twin investigations by the FBI and Swiss attorney general’s office, FIFA executives will finally be forced to defend themselves in court,” he wrote.

Germany, the reigning world champions, also called for change. Foreign Minister Frank-Walter Steinmeier told Die Welt am Sonntag newspaper that soccer brought people around the world together. “That should be the real legacy of FIFA. I have serious doubts, whether FIFA is up to this great task without a clear new start,” he said.

Many soccer experts regard a European-led boycott as unrealistic proposition believing that if it went ahead it would be a disaster for a sport that has avoided the kind of splits which have weakened others. Boxing for instance is now governed by four world bodies.

Dyke said it would be “ridiculous” for England to boycott the next World Cup in 2018 in protest because it would not have an impact. “It’s got to be done by enough nations to have an impact, if it’s done,” Dyke told BBC TV’s Andrew Marr show, saying any kind of action needed to be with others.