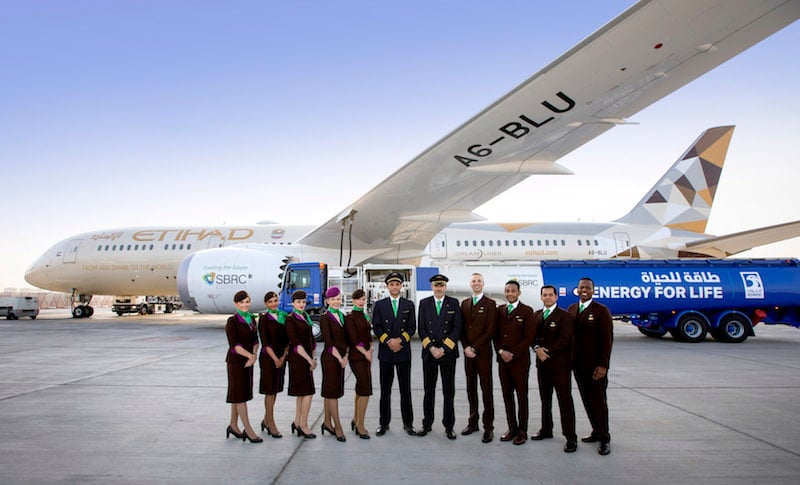 The initiative was undertaken by the Sustainable Bioenergy Research Consortium (SBRC), a non-profit entity established by Masdar Institute that is part of Khalifa University of Science and Technology.

Sustainable fuel for the flight was derived from oil in Salicornia plants, which were grown on the two-hectare Seawater Energy and Agriculture System (SEAS) farm in Masdar City.

The SEAS is a desert ecosystem designed to produce fuel and food in saltwater, and a platform that supports the aviation sector, the oil and gas industry, food production and the creation of a new agricultural alternative in the UAE. Fish and shrimp raised at the facility provide nutrients for the plants and contribute to the UAE’s food production.

Etihad’s flight was the first to be operated on fuel derived from plants grown in saltwater and “marked a major milestone in the development of a clean, alternative aviation fuel to reduce carbon emissions”, a statement said.

Mariam bint Mohammed Saeed Hareb Al Mheiri, minister of State for Food Security, said: “This proof of concept is a ground-breaking development that addresses the challenges of energy, water and food security – three elements that are inextricably linked and which form a nexus, meaning that actions in any one area have an impact in the others. What is particularly exciting about the SEAS is that it is an initiative that supports multiple platforms; aviation, oil and gas and agriculture.

“It is an important specialised initiative under the aquaculture umbrella, with the UAE recognising that this sector represents one of the best uses of what is the region’s most precious resource and has consequently established its aquaculture sector with an investment of more than Dhs100m to develop hatcheries and fish farms.”

The biofuel is blended directly with jet fuel and does not require any modifications to aircraft, engines or airport fuelling delivery systems.

Approximately 160,000 passenger flights have flown on a blend of sustainable and traditional jet fuel since the first biofuels were certified for commercial use in 2011.

“Sustainable aviation fuel represents a significant opportunity to help aviation meet its goals to cap the growth of carbon emissions by 2020 and cut levels to half of what they were in 2005 by 2050,” the statement added.

Operated by the SBRC, the SEAS pilot facility became operational in March 2016. Over the course of the next few years, the system is expected to scale up to 200 hectares in the move towards full-scale commercial implementation.