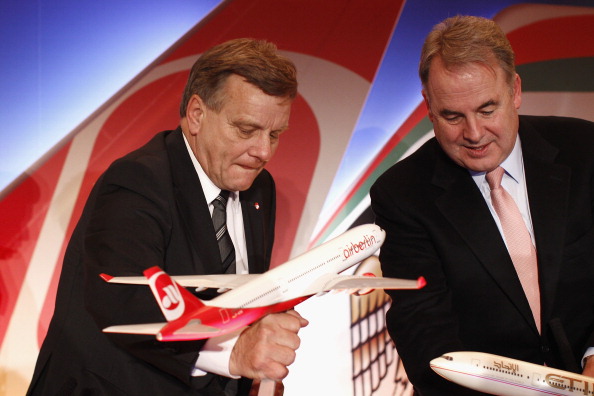 Etihad Airways is still negotiating commercial terms for a potential investment in Alitalia and is close to extending its partnership with Air Berlin, the chief executive of the Abu Dhabi airline said on Monday.

The Gulf carrier is eyeing an investment in Alitalia as it uses a combination of equity alliances and organic growth to expand its global reach and compete with fast-growing regional rivals Emirates and Qatar Airways.

Alitalia, kept afloat by a government-engineered 500 million euro ($686 million) rescue package last year, needs to find a cash-rich partner quickly to revamp its flight network or else risk having to ground its planes.

Etihad said in February it was in the final stages of a due diligence process for a possible investment in Alitalia and would make a decision in a month. The deadline has now passed.

The Gulf carrier is expected to give a proposal to the Italian airline soon to start formal talks on the potential investment, sources have told Reuters.

However, Hogan said on Monday that it was still at the due diligence stage on Alitalia.

“The mandate we have from shareholders is if we can achieve an agreement that meets the commercial mandate, we’ll come back and present that to the board. That’s where we are at the moment,” he said at an aerospace conference in Abu Dhabi.

It is also looking to restructure Air Berlin, in which it owns a near 30 per cent stake, as the German carrier faces financial challenges amid competition from rivals such as easyJet.

Late last month, German monthly magazine WirtschaftsWoche said Air Berlin would be delisted and Etihad would raise its stake to 49.9 per cent, possibly as a prelude to combining it with Alitalia.

“Entering into the Air Berlin partnership gave us access to Germany,” said Hogan.

“All our objectives have been met and we are in the final stages of negotiating the next stage of that (Air Berlin) partnership,” he said without elaborating.