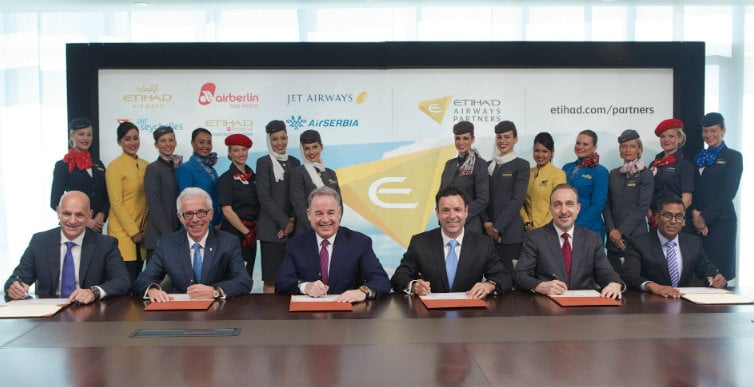 Abu Dhabi carrier Etihad Airways has unveiled a new airline alliance in a bid to provide “improved networks and schedules and enhanced frequent flyer benefits,” it announced on Wednesday.

Etihad currently has a stake in all the members of the group.

However, any airline can become an Etihad Airways Partner even if it is part of an existing alliance, such as Air Berlin, which is a member of oneworld, a statement said.

James Hogan, president and CEO of Etihad Airways, said, “We are broadening our business model to articulate and define a partner proposition for like-minded airlines which will result in synergies and efficiencies for participating airlines on the one side, and enhanced network choice, service and frequent flyer benefits for the consumer on the other.

“The Etihad Airways Partners logo will be displayed on aircraft and on branded materials by a group of airlines working together to connect travellers around the world, and increasingly to harmonise standards in the air and on the ground.”

“Frequent flyers will benefit from the formation of Etihad Airways Partners as it will remove the complexity and confusion that exists within the global alliances.

“We’re aiming to deliver a consistent experience for frequent flyers when they travel, as well as a consistent framework for earning and using their miles.”

This will include standardised mileage and tier benefits across all partners, no blackout periods and priority services.

Etihad Airways Partners will also have access to economies of scale and operational synergies such as shared sales teams in certain destinations, joint procurement of services and supplies, and shared pilot and cabin crew training at the Etihad Airways facilities in Abu Dhabi, the statement said.

Etihad has pursued a global expansion strategy by acquiring equity stakes and signing codeshare partnerships with carriers across the world. It currently has stakes in eight airlines, including Air Berlin, Aer Lingus, Virgin Australia, Jet Airways and Alitalia.