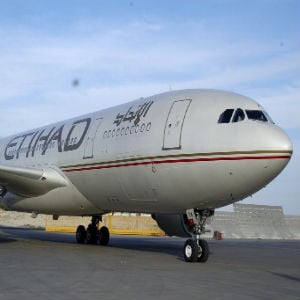 Etihad Airways, Abu Dhabi’s flagship carrier which is on an expansion spree, said it has acquired a four per cent stake in Virgin Australia Holdings through the stock market, deepening its alliance with the Australian airline.

The stake has been bought through market purchases in recent weeks, Etihad said in a statement on Tuesday. The airline did not say how much it paid for the stake and whether it plans to increase the stake in future.

Eight-year-old Etihad is attempting to gain scale quickly – particularly in Europe – as it bids to catch up with rivals such as Dubai government-owned Emirates and Qatar Airways.

In December, the unlisted airline raised its stake in Air Berlin to nearly 30 per cent from just under three per cent, paying approximately 73 million euros and lending the carrier $255 million.

Last month, it bought a three per cent stake in Irish airline Aer Lingus as a precursor to a commercial tie-up that could help the carrier gain more European routes.

Virgin Australia’s foreign equity ownership is currently sitting at 46 per cent, with 26 per cent held by Richard Branson and 20 per cent by Air New Zealand.

Its shares rose 1.2 per cent on the Australian bourse on Tuesday following the announcement and after rival Qantas warned of a likely first annual net loss since its privatisation in 1995.

Etihad began flying to Australia in 2007 and the two carriers together operate 24 flights a week between Abu Dhabi and Australia.

The airline’s first-quarter revenues rose 28 per cent on the back of increased passenger numbers and the expansion of its global network.