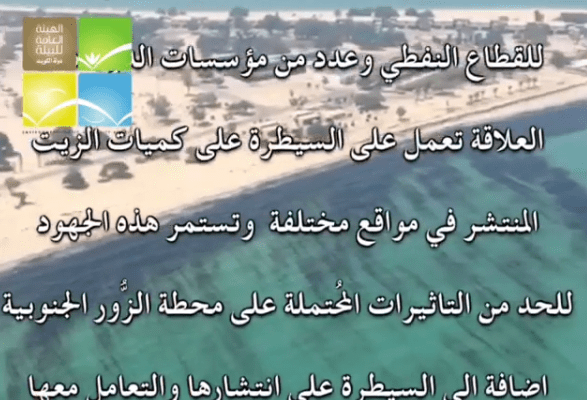 An environmental group in Kuwait has criticised the government for failing to act fast enough after a major oil spill was reported in the Al-Zour area in the county’s southern waters.

The president of Kuwait’s Green Line Society, Khaled Al-Hajeri, told Kuwait Times the non-profit held the government responsible for the damage caused by the spill after it informed authorities last Thursday.

Oil sector spokesperson Sheikh Talal Al-Khalid Al-Sabah said on Saturday that emergency teams were working to deal with the leak, which was confirmed on Friday by the Environment Public Authority (EPA).

“The government failed to issue a statement communicating the severity of this disaster. There was no warning to people against fishing or entering the polluted area, even though it is close to some of the most popular summer destinations in Kuwait,” Al-Hajeri was quoted as saying.

“This is what happens when under-qualified individuals handle the government’s most sensitive environment entity.”

The source of the leak, which has seen a large stretch of coastline covered in oil, is still unknown with speculation pointing to an oil tanker.

Khafji Joint Operations, which operates a shared oil field between Kuwait and Saudi Arabia, said on Saturday it had detected no leak in its territory after reports suggested an old 50km pipeline there was responsible.

Al-Sabah has warned of “severe consequences” for those found responsible for the incident including prosecution. Investigations are ongoing.

Hajeri suggested the spill could only have come from a Kuwaiti oil company, a Saudi oil company or from an oil tanker in deep waters.

In an update published by state news agency KUNA on Sunday, Al-Sabah said that emergency teams had removed most oil spill spots and encircled coastlines after securing vital facilities in the Al-Zour zone and surrounding areas.

Efforts are continuing to clean up remaining oil spots.

Kuwait’s oil minister Essam Al-Marzouq told Arabic newspaper Al-Rai on Sunday that the country would finish cleaning up the spill this week.