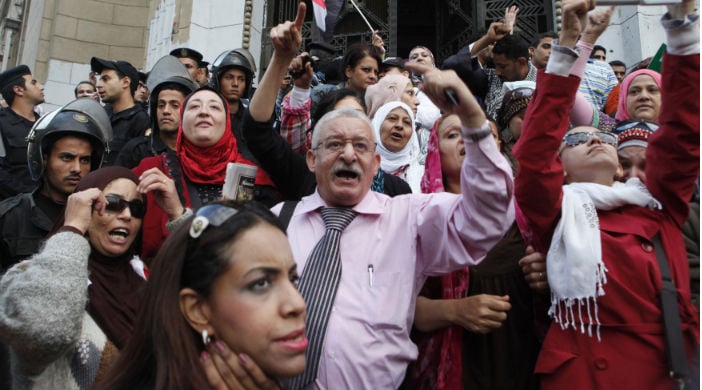 According to the decree, no authority can revoke presidential decisions and it includes a bar on dissolving the assembly drawing up a new constitution. The measures are valid only until the new constitution is adopted. Supporters argue it will hasten the turbulent and delayed transition to democracy.

A presidential spokesman left no doubt about the meaning of the decree. “The president is above all and above all other authorities.” The spokesman also stressed that the president’s decisions cannot be blocked either through not implementing them or revoking them. “This nullifies all related cases that are lodged with judicial authorities.”

This means Mursi has effectively become the president, the judiciary, the parliamentary councils, and caretaker of the Constitutional Council. Opponents say he is claiming more power than ousted President Hosni Mubarak ever did.

Opposition groups believe the underlying aim of President Mursi is to enable the constitutional assembly – currently dominated by Mr Mursi’s Freedom and Justice Party (FJP) party which has the support of the Muslim Brotherhood – to write an Islamist constitution for Egypt. This has created bitter, and potentially dangerous, divisions in the country.

More than 20 Egyptian rights groups have called on President Mohammed Mursi to withdraw the decree in an open letter. “These actions undermine the rule of law and the pillars of justice and exploit presidential powers to protect the interests of a particular political group,” said signatories to the letter posted on the Cairo Institute for Human Rights website.

“The president, who now possesses authorities beyond those enjoyed by any president or monarch in Egypt’s modern history, has dealt a lethal blow to the Egyptian judiciary, thereby declaring the beginning of a new dictatorship in which it is not permitted to oppose the president, criticise his policies, or challenge his decisions.”

On Saturday, Egypt’s judges denounced the decree as an “unprecedented attack” on the judiciary. After an emergency meeting, the Judges’ Club – the union that represents judges throughout the country – called for “the suspension of work in all courts and prosecution administrations”.

There have been major rallies for and against President Mursi’s move, with more planned for Tuesday.

Internationally, the decree has raised concern.

“The decisions and declarations announced on 22 November raise concerns for many Egyptians and for the international community,” said US State Department spokeswoman Victoria Nuland. “One of the aspirations of the revolution was to ensure that power would not be overly concentrated in the hands of any one person or institution,” her statement added.

EU foreign policy chief Catherine Ashton said: “it is of utmost importance that the democratic process be completed in accordance with the commitments undertaken by the Egyptian leadership.”