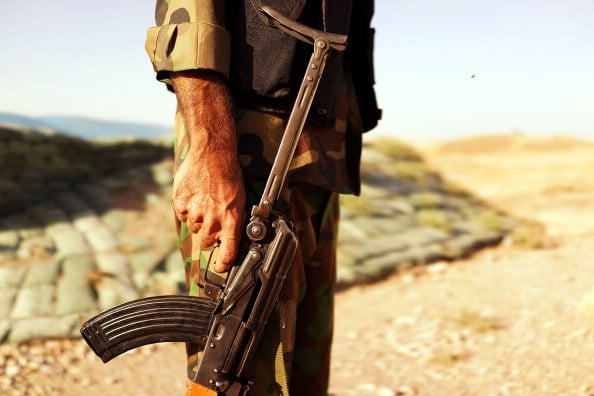 This is proving to be a brutal and uncertain year for Iraq. At least 5,600 civilians have been killed and nearly 12,000 others wounded in Iraq during the first half of the year and up to 1.2 million people displaced from their homes because of the violence.

Since June thousands of people have fled from violence in Ninewa, Diyala and Saluddin provinces. Government forces have been shelling Falluja, 70 kilometres west of Baghdad, for months trying to drive out Islamist militants.

Deploying fleets of well-armed Toyota pick-up trucks, highly motivated and determined militias of the self-styled Islamic State (IS), previously Islamic State of the Iraq and Levant (ISIL), have overrun much of the north of the country, even though they are relatively small in numbers.

Meeting little resistance, IS has declared a Caliphate (Islamic state) over the swathe of territory it now controls stretching from the eastern Aleppo province in northern Syria to Diyala in eastern Iraq. As a result, the old border between Syria and Iraq has ceased to exist.

With Kurdistan’s Peshmerga forces also seizing control of Kirkuk, Iraq’s future governance over these and other areas is in doubt. However, there are few signs that Baghdad is willing to compromise in any way over the loss of territory.

A COUNTRY TRYING TO LOOK NORMAL

Major airports are open and sizeable contract awards continue to be made. Iraq’s cabinet announced on July 23 that it had awarded China Petroleum Pipeline Bureau a $607 million contract to build an oil storage deport near the Nassiriya oilfield. Whether these will be completed is the big question.

At the present time of crisis, there does not seem to be any leeway to repeat the months of haggling that it took to agree a government after the country’s first post-Saddam elections in 2010. Many want to see big changes in governance, inclusiveness and more power for the provinces. The immediate problem is security and insurrection, but Iraq’s deepest worry is its lack of administrative capacity.

This was illustrated graphically by the country’s inability to combat rebellion in Ramadi and Falluja at the beginning of 2014 and now compounded by the loss of Kirkuk and Mosul. IS has now declared the latter the capital of its Islamic state.

The loss of major cities and huge areas to a few thousand armed insurgents is a conundrum, given the hundreds of thousands of Iraqi military personnel and police deployed in the country.

However, the salutary truth is that these incompetently led forces possess little training, even less motivation and wear a uniform because the salary offered to them saves them and their families from destitution. The central government’s response with air attacks is designed to stem the tide. Outside observers believe that only a political solution can work. Time though is running out.

The so-called caliphate’s use of extreme violence, threats and intimidation against civilians and military opposition alike has proved so successful that its threat to march on to Baghdad no longer seems fanciful. People are scared and breaking the will of local populations has allowed the relatively small force to surge south, focusing their fight recently on battlegrounds just 70 kilometres from the capital.

Charles Lister of the Brookings Doha Centre in Qatar comments: “In Iraq, instead of insisting on a swift and dramatic attack on Baghdad, IS has patiently targeted government weak points and sought to control territory that could serve to facilitate a multi- pronged assault on the capital city.”

IS is likely to expand its presence beyond Syria and Iraq in the coming months looking to develop support and influence, he believes.

The security threat has caused companies such as Exxon and BP to remove significant numbers of their foreign workers from the country even as bureaucratic delays seem likely to increase with long delayed infrastructure projects moving further back as the government focuses on national survival.

“At no point since Saddam’s overthrow in 2003 has Iraq not been able to conduct business, but there are concerns about what happens if the centre does fall apart”, says Shashank Joshi of the UK’s Royal United Services Institute.

“For businesses, you would think very hard about sending people in.”

The US and Australian embassies as well as the UN are among many missions that have withdrawn staff and curtailed consular activities.

Last month, hundreds of American contractors, working in support of US government foreign military sales programmes, were airlifted to Baghdad from the Balad air base 80 kilometres north of the capital.

BP has shipped out all “non-essential” employees, about 20 per cent of its staff, from the Rumaila oilfield in the south and Exxon has evacuated staff from the West Qurna 1 field, though both companies’ operations continue.

UK-based BP, together with China National Petroleum Company (CNPC), has a service contract to develop the Rumaila field. The field is the workhorse of the country’s oil industry and has estimated reserves of 17 billion barrels and produces around 1.35 million bpd, representing a third of the national crude output.

In May 2013, BP also signed a five-year deal with General Company for Ports of Iraq to build a new terminal at the oil export port of Khor al-Zubair. BP will help Iraq build an advanced terminal there to receive refined oil product shipments and also to export products in future.

Others are on standby to ship out personnel. China National Offshore oil Corporation (CNOOC) has said that if insurgents begin an assault on Baghdad, it will pull out of the country immediately.

There are around 10,000 Chinese personnel working in Iraq for CNOOC, Sinopec, PetroChina and other companies.

Japanese firms operating in Iraq are reassessing business plans in light of the country’s descent into chaos, Nikkei Asian Review has reported. If there is a general pull out, some $4.8 billion of Japanese loans to finance up to 30 projects including a gas fired power plant in the north at Al Akkaz could be in jeopardy.

However, Russia’s gas producer Gazprom Neft, which owns a 30 per cent stake in the Badra field and was due to start producing gas from the field at the end of June, says it that has not encountered security problems. Royal Dutch Shell, involved in revamping the Majnoon oilfield, has also not reported security problems and no staff have been removed.

Commenting on the situation, BP’s chief executive Bob Dudley said that the violence was terrible and would have “far reaching, wide-ranging implications, although it isn’t likely to spread all the way to the country’s southern oilfields.”

“This is a very difficult country to predict,” says Hawre Daro, chief executive of Faruk Group based in Erbil. “I don’t see that federal Iraq, ruled from Baghdad. I don’t think the Sunni areas can be retaken by force. If Iraq is to continue as a country, what needs to be done is create semi-autonomous regions and have no centralised government. Or a situation more like the UAE,” he says.

Faruk Group, which was founded by billionaire Faruk Mustafa Rasool, operates three hotels in the Kurdish region. The three properties are feeling the crisis with the Grand Millenium, Millenium Kurdistan and the Copthorne hotels only half full after near 100 per cent occupancy levels in 2013.

The group’s main long-term strategy has been focused on Iraq’s developmentand reconstruction programme with two cement factories and a third under development as well as an aluminium plant scheduled to open in 2015 and a steel mill the year after.

“I think now we have to think about our investments and whether to look at all of Iraq as one market, or to concentrate on Kurdistan. If it is the Kurdistan market, then we have to be a bit more careful. I think some of the developments that we have planned need to be delayed for a while,” Daro says.

A number of projects may be shelved or delayed because of the instability in the country. Dubai’s Emaar Properties announced the launch of a $3 billion project in Erbil last November with chairman Mohammed Alabbar then describing the decision as “perfect fit” to the company’s global strategy. Emaar was earlier looking at a $2 billion tourism development in Sulaymaniyah with Faruk Group.

Potential infrastructural projects had begun to attract some of the largest global financial institutions with Standard Chartered and Citibank setting up offices in Baghdad in 2013.

According to Viswanathan Shankar, Standard Chartered’s CEO for the Middle East: “We have been doing some business in Iraq, enough to build a body of knowledge about what’s going on, that we feel comfortable entering – with eyes wide open.”

Mayank Malik, Citi’s CEO for Iraq and Jordan, commented “before we formally launched our brand in June 2013 there had been a long process of consideration at the highest levels of the bank following consultation with the bank’s international clients and the feedback was compelling.”

If Iraq is to continue as a country, what needs to be done is create semi- autonomous regions and have no centralised government. Or a situation more like the UAE.

Malik points out that it was looking beyond immediate difficulties in the country and made judgements on economic fundamentals with the bank’s economists projecting that Iraq’s population will have reached 50 million and it will become a $2 trillion economy by 2050.

According to Ed Morse, global head of commodities research for Citibank, “The concerns are really about the medium to long term rather than short term. The biggest concerns are about balances in 2020.”

Citi’s decision to move into Iraq represented the first emerging economy it had opened up in since 2007 when it established a presence in Serbia. This was just before the global financial crisis the following year.

The timing doesn’t appear any more propitious this time round. In terms of governance as well as security, the situation in Iraq needs to be turned around very quickly. It is not an impossible task.

However, the prospect of Iraq being able to achieve a sufficiently robust political system to enable rapid output growth by the end of the decade is at best uncertain.