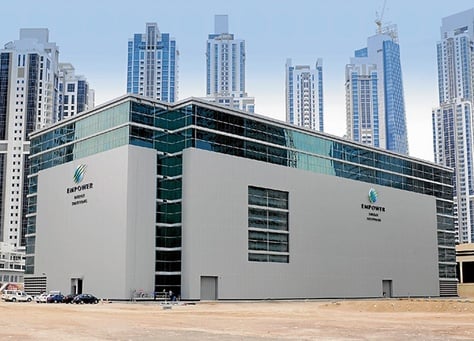 Dubai district cooling firm Empower bought Palm Utilities from a unit of Dubai World for $500 million on Sunday, part of a shuffle of assets between companies ultimately owned by Dubai’s government or the emirate’s ruler.

Acquiring Palm Utilities, which includes Palm District Cooling, will give Empower about 70 per cent of the United Arab Emirates’ district cooling market, a company statement said.

District cooling is a centralised system for chilling large buildings, such as offices, factories and tower blocks, instead of having a large number of individual air conditioning units.

Empower will immediately take over all operations, assets and liabilities of Palm Utilities, which was previously owned and operated by Istithmar World.

A joint venture between Dubai Electricity and Water Authority and Dubai Technology and Media Free Zone (TECOM) Investments, Empower will fund the purchase through internal cash, debt and equity financing, the statement added.

Empower signed a $600 million, six-year loan facility with four banks – Citigroup, Emirates NBD, Mashreq and Standard Chartered – to fund its acquisition at the end of last year, according to Thomson Reuters data.

Istithmar World is part of government-owned Dubai World, while TECOM is part of Dubai Holding, the investment vehicle of Dubai’s ruler.

The sale adds to a series of disposals by Dubai World, which had promised to sell non-core assets under a $25 billion debt restructuring plan drawn up after 2009, when the group fell victim to a property market crash and the after-effects of the global financial crisis.

Dubai has been juggling assets between its state-linked firms to allow cash to be transferred from stronger entities to debt-laden ones such as Istithmar. The emirate faces a heavy schedule of debt maturities in the next three years, including the first repayment under Dubai World’s restructuring plan, worth $4.4 billion and due in May 2015; in total, the Dubai government and related entities have roughly $50 billion of obligations coming due between 2014 and 2016.

Last month, Istithmar sold the Atlantis resort, which sits at the top of a palm tree-shaped island in the Gulf, for an undisclosed sum to Investment Corp of Dubai, a holding company which controls some of the emirate’s top firms.