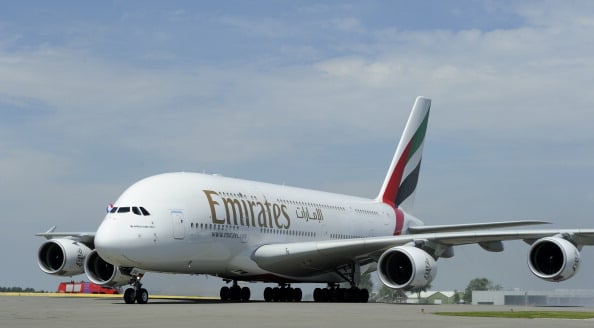 New aircraft and fresh routes will help Dubai’s flagship carrier Emirates grow profit by no less than eight to 10 per cent in coming months, its president said on Wednesday.

“We will continue to grow at a percentage which is never going to be less than about 8-10 percent, and that’s a conservative figure,” Tim Clark said on the sidelines of an aviation conference in Dubai.

Clark warned of currency risks that are dampening profit even as the airline can take advantage of low fuel prices in the months ahead.

“As a dollar-based airline, we are facing collapses of currency in Russia, in Australia; the euro, the pound has gone way down and these are primary income generating countries,” he said.

Despite the currency adjustments on the balance sheet of the airline, new aircraft deliveries and new routes should help bolster growth.

Clark said the airline would take deliver of three new A380 superjumbos in the next four weeks, taking the total to 57.

Emirates’ bottom line was hit by runway upgrades in the first six months of the 2014, resulting in modest growth of eight per cent.

Emirates said it planned to grow to 70 million annual passengers by 2020, a jump from near 47 million now.

Clark said as the new Terminal 4 comes online in summer next year for international carriers, it would take up the vacated capacity at Terminal 1, while runway upgrades would allow an improved traffic flow, pushing back any need for the airline to move base.

“There are many steps going on to increase the runway movement capability … so we’ve got a long way to go before we can say we’ve run into a flat line situation before we go to DWC,” Clark said.