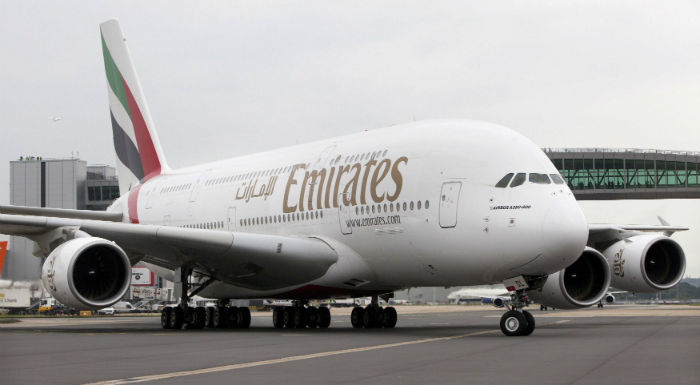 Dubai airline Emirates will operate a one-off A380 service to Sao Paulo’s Guarulhos International Airport on November 14 to mark its eighth year of operations in Brazil.

The service will be the first ever commercial Airbus A380 flight to Brazil and South America, Emirates said in a statement.

Emirates was also the first airline to introduce non-stop direct flights between the Middle East and South America, when it began daily flights between Dubai and Sao Paulo in October 2007.

Currently, the airline also has a daily service between Dubai and Rio de Janeiro.

“The A380 is an iconic aircraft that continues to excite both our customers and aircraft enthusiasts, and therefore we decided to take it on a one-off service to Sao Paulo to celebrate our eighth anniversary,” said Emirates senior vice president of Commercial Operations for Latin America, Southern and Central Africa Orhan Abbas.

“As Emirates is a global partner of Formula 1, we also wanted this historic flight to coincide with the Brazilian Grand Prix taking place on the 15th November at the Interlagos motorsport circuit.”

However, the carrier has no plans at present to introduce the A380 on a scheduled basis to Sao Paulo, Abbas confirmed.

Emirates is the world’s largest operator of the Airbus A380 with a fleet of 67 in service and a further 73 on order.

The airline has added several new A380 routes this year and currently operates the jumbo jet to 34 destinations including Auckland, Brisbane, Sydney, Mauritius, Melbourne, Kuala Lumpur, Seoul, Singapore, Shanghai, Beijing, Hong Kong and Kuwait. It will also be launching two-class A380 flights to Copenhagen and Bangkok from December.

To date, the airline has carried over 40 million passengers on the A380 since its launch in 2008. Its current fleet has visited 56 airports, flown over 630 million kilometres and made 47,200 return flights, the statement added.