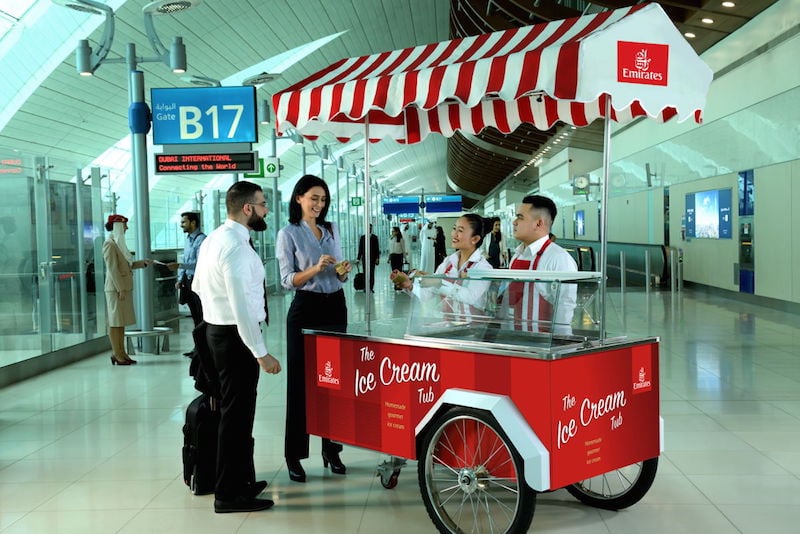 Dubai airline Emirates will offer complimentary ice cream to all its passengers at Dubai International Airport this summer.

Ice cream cups will be given out at the Terminal 3 departure and transit areas from June 15 to August 31 during peak travel hours.

The ice cream, branded Emperor, is made in-house by Emirates Flight Catering and the airline expects to serve two million cups of ice cream over the next three months, it said in a statement.

Emirates branded ice cream carts will be placed at the airport and passengers can choose from five flavours including chocolate, vanilla, date and Arabic coffee, mango sorbet and lemon sorbet.

Emirates’ Emperor ice-cream is currently served in premium classes on select flights to Europe and the UK, and in the seven Emirates lounges at Dubai International Airport.

The airline, the world’s biggest airline by international travellers, offers direct connections to over 150 cities across six continents including its latest destinations this summer – London Stansted and Santiago, Chile.

Dubai’s Emirates to serve Osaka with A380, offers Santiago discounts

The carrier said the ‘my Emirates pass’ promotion would allow travellers to take advantage of discounts across Dubai from June 1 to August 31.

Visitors can present their boarding pass and a valid form of ID to get offers in more than 250 locations such as restaurants, retail outlets, theme parks and spas.