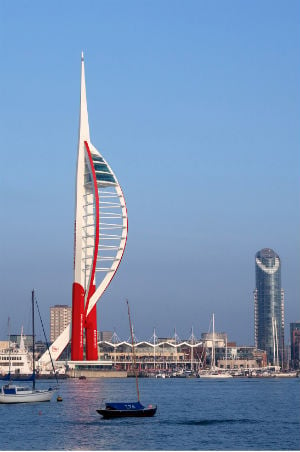 Dubai airline Emirates has inked a naming rights deal with Spinnaker Tower, one of the UK’s tallest towers outside London.

Under the deal, the building will be rebranded as Emirates Spinnaker Tower from July 2015. The agreement is worth £3.5million and will be valid for five years, Emirates said.

Spinnaker Tower will also sport Emirates red branding across its length and breadth.

“This sponsorship represents our vested interest in the UK where we currently operate 16 daily flights and where we are responsible for injecting and stimulating over £2.1 billion into the country’s GDP each year,” said Tim Clark, president, Emirates Airline.

“Part of the reason that this sponsorship opportunity was so appealing to us is that it will enable the local City Council to reinvest this partnership money into the local community, something that we are proud to be able to support.”

The Emirates Spinnaker Tower is situated on the waterfront in Portsmouth, 100 kilometres from London Gatwick and London Heathrow, where Emirates operates a total of eight daily flights.

The tower is owned by Portsmouth City Council but is run by a private company. The deal will help boost the coffers of the local city council, officials said.

“With the financial situation the council faces we have to think creatively about how we can achieve the maximum income potential from our assets, and this is just one of several deals we are working on,” said councillor Donna Jones, leader of Portsmouth City Council.

“The money this sponsorship brings in will help reduce the need for cuts to vital services such as social care and those things communities value so much like libraries, community centres and leisure facilities.”

Despite the authorities’ approval, the deal has been met with some local opposition, including an online petition, the UK media reported.

Emirates is also the sponsor of a London cable car system across the Thames, dubbed Emirates Air Line, and football tournament the FA Cup.