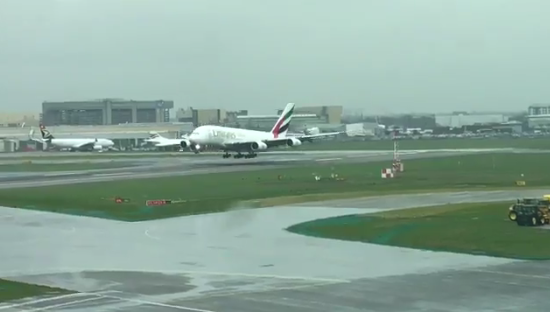 An Emirates flight from Manchester to Dubai was forced to make an emergency landing yesterday after its front wheel became stuck.

EK18 was forced to end its journey at London’s Heathrow airport after flying for just 90 minutes.

London’s Evening Standard reports plane spotters saw the Airbus A380 plane circling above the English county of Yorkshire after taking off at 1:30pm yesterday.

One of the wheels used during take-off and landing failed to retract after the plane was airborne, according to some observers.

The plane landed at 3pm in an effort applauded by one plane spotter for keeping pressure off the affected front wheel. @LEMDEGLL posted a video clip of the landing on Twitter.

??EK18 has landed safely, a great landing keeping the pressure off of the front gear. It has taxied off & met by Fire Services?? pic.twitter.com/TEG9zIS8jN

The A380 was met by fire services and taxied off the runway.

Emirates later said in a statement that the plane landed safely and all passengers were disembarked and booked on alternate flights for their journey to Dubai.

“Emirates apologises for the inconvenience caused. The safety of our passengers and crew is of paramount importance and will not be compromised,” a spokesperson said.