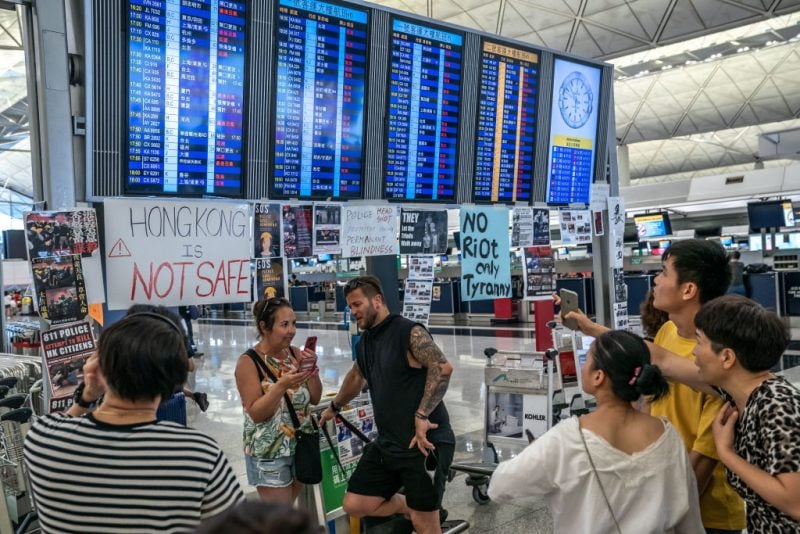 Dubai airline Emirates announced on Monday that its flights to Hong Kong had been cancelled after the closure of the airport by authorities due to protests.

“The operations of Emirates flights EK384 from Bangkok to Hong Kong and EK385 from Hong Kong to Bangkok on August 12 has been cancelled due to protests at Hong Kong International Airport and subsequent ‘Flight Stop’ put in place by Hong Kong Airport authorities,” the airline said in a statement on its website.

“We are monitoring the situation closely, and aim to give customers as much notice as possible if there are any further changes to our operations.”

It advised passengers holding tickets to Hong Kong to contact their local Emirates office and check the status of their flights.

Abu Dhabi’s Etihad Airways also announced that flight EY833 from Hong Kong International Airport had been “significantly delayed” due to the cancellation of all departing flights on Monday.

“We regret any inconvenience caused by this extended delay. The safety of our guests and crew is Etihad Airways’ highest priority,” the airline said on its website.

Hong Kong International Airport cancelled all departures on Monday, and asked passengers not to travel to the airport.

According to reports, nearly 200 flights were cancelled.

At least 200 flights have been cancelled on Monday because of the ongoing protests at Hong Kong International Airporthttps://t.co/5LVDr4f6fI pic.twitter.com/hKAPkuaLqW

In a statement, officials blamed “seriously disrupted” operations for the move even as as thousands of anti-government protesters occupied the airport.

The scene at Hong Kong’s airport, where thousands of protesters have flooded the terminal. The airport took the rare step of canceling all flights and shutting down. pic.twitter.com/BV559oF5NU

Hong Kong has been seeing mass demonstrations and protests since June sparked by a controversial extradition bill, which has since been suspended.

However, demonstrators want the bill to be fully withdrawn and are also demanding more reforms from the government.