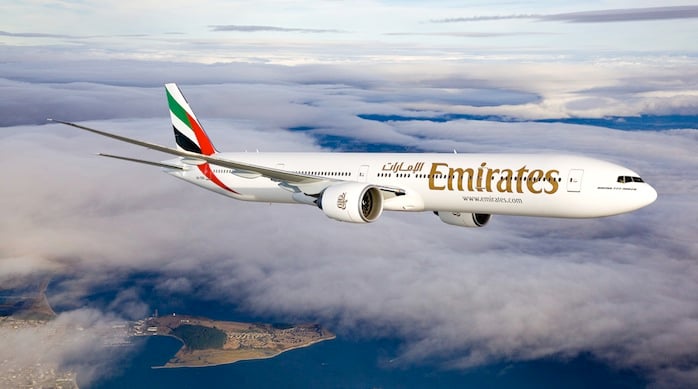 Emirates has launched a second daily service to the American city of Boston from October 1, 2015, to boost passenger and cargo capacity on the route.

The route will be operated with a Boeing 777-300ER aircraft with eight private suites in first class, 42 seats in business class and 304 seats in economy class.

It complements the existing daily service, also operated on a Boeing 777-300ER aircraft, which was launched in early 2014.

“The additional service to Boston not only doubles our capacity to meet demand, but will also provide passengers with the option to fly to new destinations out of Boston Logan International Airport,” said Emirates divisional senior vice president of Commercial Operations West Hubert Frach.

“The new flight will also create improved connections for passengers travelling from Dhaka, Kolkata, and many destinations throughout Africa, the GCC and Middle East via Dubai and onwards to the United States.”

Massachusetts’ capital and largest city, Boston is a popular destination for foreign and domestic tourists. It is also an educational hub and Emirates is hoping to tap into students’ and academic community demand for travel.

Passengers seeking to travel to other destinations in the US can also use Emirates’ interline partner JetBlue Airways, which flies to 42 cities from Boston airport.

The Dubai airline’s codeshare agreement with JetBlue allows customers of both airlines to receive a single combined ticket on selected routes, including one-stop check-in and baggage transfer.

The added capacity to Boston is also expected to boost trade, Emirates said. Lobsters, accounting for 55 per cent of the value of Emirates’ cargo exports out of Boston, are transported via the bellyhold of the airline’s Boeing 777 and its cool chain solutions.

Approximately 135 tonnes – roughly 223,917 lobsters – are exported from Boston each month and these are primarily delivered to Dubai, Shanghai, Guangdong, Bangkok and Taiwan.

Along with seafood, electronic equipment for industrial use is also a major component of Emirates’ business in Boston.

Meanwhile Emirates’ top imports to Boston are garments and textile products from the Indian city of Chennai and Sri Lanka.

Fast-growing Emirates currently flies to 147 destinations in 79 countries including to 10 cities in the US.

Emirates has carried more than 11 million passengers on US flights since launching services to New York in 2004.

Its cargo unit transports up to 650 tonnes of US exports each week – including auto parts from New York, apples and cherries from Seattle, and oil and gas equipment from Houston.