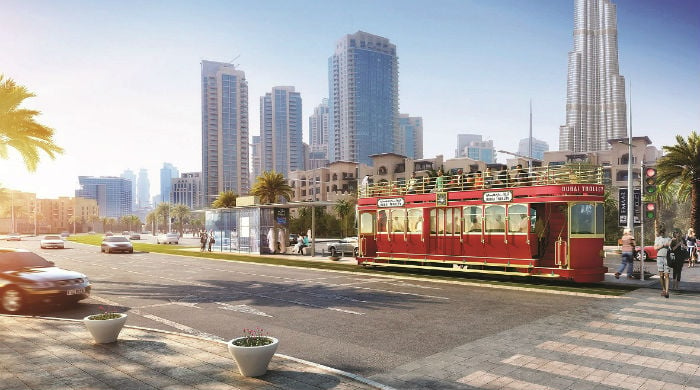 Dubai developer Emaar Properties has announced the launch of a new electric-powered tram transit system to serve residents and visitors in its Downtown Dubai community.

Called Dubai Trolley, the hop-on hop-off transit system will span a distance of seven square kilometres in Downtown Dubai connecting attractions such as Burj Khalifa, the world’s tallest building, and The Dubai Mall.

Aligned along Mohammed Bin Rashid Boulevard, the first phase of Dubai Trolley will cover a distance of one kilometer and will have three stations offering access to The Dubai Mall, and The Address Downtown Dubai and Vida Downtown Dubai hotels.

The first phase is scheduled for completion early next year, Emaar said in a statement.

Initially, Dubai Trolley will carry 74 passengers in double-decker trams that have the provision of open-deck and air-conditioned seating. During winter, the glass window panels of the trolley tram will be removed.

The trams, designed to complement the Arabesque architectural features of Downtown Dubai, will be painted bright red with gold pin-stripes and green trim colours.

The trolley will travel at an operational speed of 16 km/hr and has a maximum speed of 80 km/hr, which can be regulated according to requirement. Crossings will be provided along the tramway to facilitate pedestrian movement, Emaar said.

All the stations will be air-conditioned, and the Dubai Trolley terminus near Old Town Island will also feature F&B offerings.

Being electric and hydrogen powered, the Dubai Trolley has “practically zero-emission,” the company said.

Work on the first phase of trolley-tracks and Dubai Trolley depots has already commenced, the statement added.

Ahmad Al Matrooshi, managing director of Emaar Properties, said: “Dubai Trolley is a smart urban mobility service that further builds on the trolley tram systems that are in use in several cities across the US and Europe.

“While they were a game-changer in public transport when first invented in the 1880s by introducing a new concept to urban mobility, they are now largely used as tourist attractions.

“An environmentally sustainable system that supports the development vision of the UAE, Dubai Trolley brings a convenient and user-friendly transit mode to Downtown Dubai,” he added.

The 500-acre Downtown Dubai development is currently linked to the Dubai Metro through an air-conditioned travellator and is also serviced by public transport including buses and taxis.

Visitors can also tour the area through The Boulevard Bus Tour.

The development’s flagship retail hub, the Dubai Mall, welcomed over 75 million visitors in 2013, making it the world’s most-visited destination for the third consecutive year.