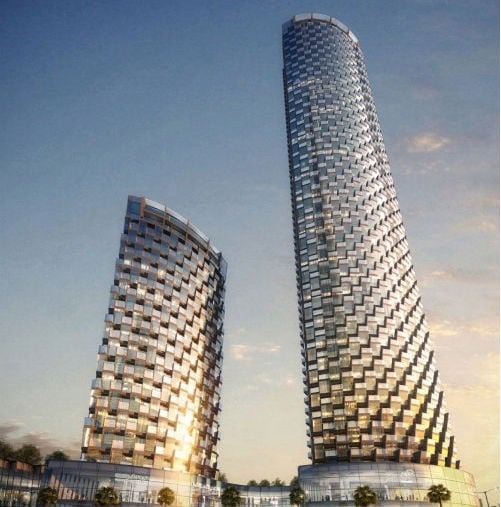 Dubai property developer Emaar has announced the launch of yet another new development, Burj Vista, in Downtown Dubai.

Burj Vista features two identically designed towers, one with 20 storeys and the other with 65 storeys that offer 120 and 520 luxury apartments respectively.

The towers, located on Mohammed Bin Rashid Boulevard, will be directly linked to the newly opened pedestrian link that connects the Dubai Metro station with Downtown Dubai.

Amenities include a gymnasium, pool, children’s play areas, a multimedia hall, and business centre, and the boulevard level of the towers will feature retail outlets and restaurants.

Sale of one, two and three-bedroom apartments in Burj Vista will be held this week, said Emaar.

Dubai’s property market has revived significantly since it crashed in 2008/2009 and prices are starting to return to the peak rates, say experts.

In a report released this week, consultant Jones Lang LaSalle (JLL) said that residential sales prices rose 18 per cent in the first quarter of 2013 compared to the same period a year ago.

Many of the new project launches by developers such as Emaar and Damac were sold out on day one. The Dubai police was reportedly brought in to control crowds during Emaar’s sale of townhouses in Mira last week.

“An initial glance might suggest that many of the conditions that led to the unsustainable growth in real estate prices in Dubai in 2006 and 2007 have returned,” said lan Robertson, CEO of JLL MENA.

“However, there are important differences as the Dubai market has matured. The excesses of the last speculative boom will hopefully be replaced by a period of slower but more sustained growth in demand and prices,” he said.

“The challenge is to ensure that this confidence does not lead to undue exuberance. If the market has learnt anything from the past decade, it is that an extended period of sustained growth is far more beneficial than a short period of unsustainable growth followed by an inevitable crash,” he added.