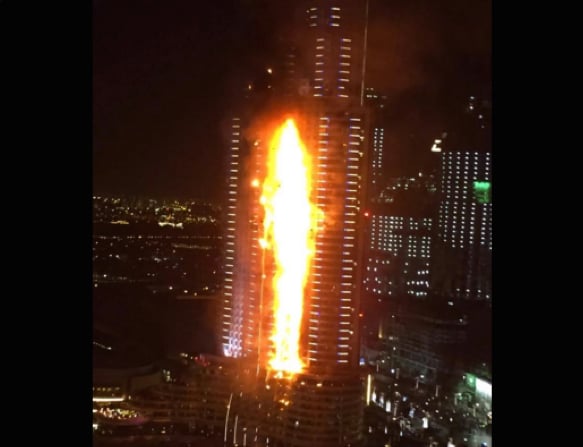 The massive blaze at The Address Hotel in Dubai on December 31 was caused by an electrical short circuit, the Dubai police confirmed on Wednesday.

An electric fault in a spotlight used to illuminate the hotel led to the fire at the 63-storey hotel, police told local media.

A spark from cables connected to the light reportedly set-off the fire at about 9.25pm. It is anticipated to have started between the 14th and 15th floors of the tower.

Police chief Khamis Mattar Al-Mazeina also confirmed that flammable liquids such as petrol did not play a role in the accident.

“The results of the investigation come after inspecting the area where the fire started, collecting and testing evidence as well as listening to witnesses’ testimonies,” he said.

The blaze broke out on the luxury Address Hotel Downtown Dubai hours ahead of New Year fireworks at the neighbouring Burj Khalifa. A total of 15 people were injured, according to officials, while another person suffered a heart attack.

Following a large-scale evacuation, the hotel was sealed off as firefighters fought to bring the blaze under control. Officials later confirmed that the hotel would reopen.

Developer Emaar Properties said that it did not expect the fire to have a “material impact” on its operations.

It also appointed Dutco Group to clear and restore the fire-ravaged building earlier this month.